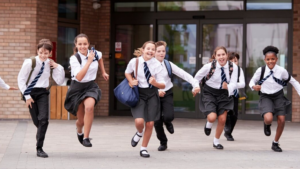 There is a bit of extra nervous tension in households across Australia this week. School is starting.

Students are savouring the last moments of summer break. Parents are checking and re-checking supply lists, trying to pick up last minute items. Some prospective kindergarteners are wearing their uniforms and shoes around the house to ‘get ready’.

While a little anxiety is natural, especially in these uncertain times, the evidence and experiences from the last two years are clear. We must keep students in school, learning face to face, wherever possible.

It is worth noting that there are two potential challenges to be overcome. The first is logistical: with high rates of transmission and contagion across the country, there is a serious risk of rolling teacher absences caused by infection and isolation requirements.

As has been seen in other industries — especially in retail, and transport and logistics — staff shortages have had a significant impact on supply. This will be remain an ongoing challenge until the current wave dissipates.

The second challenge is more insidious: the lingering attachment to ‘Covid-zero’ and the desire to return to the ‘safety’ of lockdown and remote learning. This is particularly concerning in some parts of the country but less so in others.

For example, in New South Wales and Victoria where school starts next week, staying open and returning to a more normalised existence is clearly the priority, despite some objections particularly on social media.

It is telling that these states, which have struggled most heavily under the burdens of lockdown and the most serious consequences of Covid, are the most opposed to closing schools.

However, it is less clear that this is the top priority in other states, especially Queensland (where school return has already been delayed two weeks) or Western Australia, where ‘Covid-Zero’ might as well be the state motto.

To be fair, both states have outlined plans to get back to school despite Covid.

However this doesn’t mean schools will stay open if cases are found in the system. After two years of ‘quick lockdowns’ and ‘temporary health measures’ that have proved more or less permanent, parents should be very sceptical of the commitment of these governments to opening up.

To date, the Australian evidence suggests that school closures have not been as damaging as feared from an educational progress perspective.

By and large, the average Australian student has not fallen behind pre-pandemic levels. Nor has there been any marked increase in the gap between less and more educationally disadvantaged students. While that is welcome news, it should not be a source of complacency.

In particular, journalist Alec MacGillis has documented the significant emotional and educational toll that this policy has had on American teenagers. MacGillis has also shown how some students from minority and disadvantaged communities have almost disappeared from society as a result of school closures. For these students, remote learning has meant no learning.

There are some reasons to think this problem may not manifest in the same way here: many of Australia’s most disadvantaged students are based in remote communities that have not been as impacted by lockdown policy.

However, Australia doesn’t even really have the infrastructure in place to track this potential problem. Nor should we assume that negative social impacts of lockdowns won’t manifest in the future, even if they currently aren’t as bad as some feared.

While it’s true that around four in five Australian students say they coped well during lockdowns, nearly half also report high or very high risk of psychological distress. Many recorded no noticeable improvement in their social wellbeing months after lockdowns passed. The potential long-term impact on their education and wider wellbeing may be with us for years to come.

The reality is that many of the policies around school closures and lockdowns have not been based on what is good for students, or indeed parents — who have been expected to somehow manage months of remote learning on top of remote working. Policy has been motivated by what is best for teachers.

Around the globe, opposition to face-to-face learning has been driven by teachers unions. In Chicago, the teachers union came out on strike in early January over returning to school. Teachers from Israel to Birmingham are threatening strikes and boycotts over Covid.

Here in Australia, January saw teachers’ unions indicating a preference for remote learning in the face of Omicron, while in recent days, unionists in South Australia are threatening to strike over Covid testing plans.

The pandemic has brought changes in the nature of work in recent decades into stark contrast. For some employees, the pandemic has forced workplaces to finally embrace remote work options. Knowledge workers have been freed from expectations of having to be seen in the office to be considered working.

For some however, the nature of their work has forced them to remain in their workplaces despite the spread of Covid. While some are professionals (like doctors) who are well compensated for their jobs, most are working relatively low paid positions in retail, logistics and service industries.

While those of us who can work remotely should be cautious about opining too strongly on the choices of those who have to show up to work in person, the reality is some people simply have to work face to face for the country to function.