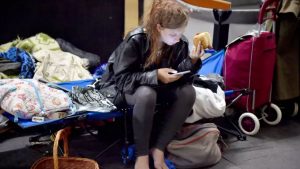 There are real answers to the homelessness crisis we are seeing in Sydney’s CBD and other cities, but those solutions are being ignored in favour of allowing people to spiral further into disease, addiction and mental health problems.

Sydney is seemingly facing ­another ‘rough sleeper’ crisis with a new shanty town popping up at the QVB shopping precinct. And once again Sydney City Council and the State Government are playing the blame game over who is responsible for ending homelessness.

But if we really want to end this problem, we not only need to tell the truth about it; we must also be ­prepared to implement the ‘tough love’ solutions that are required to permanently stop people living on the streets.

Unfortunately, we haven’t learned much since the ‘tent city’ fiasco in Martin Place back in 2017; the same myths about the causes and cures of homelessness are being regurgitated all over again.

In reality, most of the 100,000 ­people who are officially counted as homeless by the Australian Bureau of Statistics actually have roofs over their heads: such as those living in homeless hostels, or new migrants who choose to reside in crowded or multi-family dwellings for economic or cultural reasons.

Only about 8200 people nationally are truly homeless as the average Australian understands the term — a person who sleeps on the streets.

Another myth is the claim often made by charities and academics that lack of housing availability and ­affordability is reason people end up sleeping rough among cardboard boxes and litter.

But this is simply untrue. The taxpayer already spends nearly $10 billion per year on housing and homelessness, but this has done little to get people off the streets. And as was reported yesterday, several of those sleeping rough at the QVB ­actually have proper accommodation — and may be choosing to be on the streets so they can beg.

But many of those living on the streets are there because they suffer mental illness, addiction or alcoholism.

A truly compassionate society should help people to both avoid, and deal with, those problems.

Yet homelessness services have proved unable to help, because they refuse to take a ‘paternalistic’ ­approach to assisting people to exit the streets for fear of breaching their ‘right’ to sleep rough.

Hence, participation in mental health and drug counselling and treatment is currently optional. This means that the people who need help the most are the least likely to get it. We need to take a stronger ­approach to giving rough sleepers the help they truly need to deal with their addictions and mental illnesses.

We will not start to see any real improvement in the situation for ­people living on the streets until we implement these real solutions.

Dr Carlos d’Abrera is a psychiatrist and research associate at the Centre for Independent Studies. His report, Dying with their Rights On: The Myths and Realities of Ending Homelessness in Australia, was published in December.