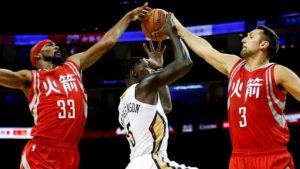 Has the fallout from a single tweet by an American basketball team manager in support of the Hong Kong protestors put another nail in the coffin of US engagement with China?

Late last week, Houston Rockets manager Daryl Morey posted a message on Twitter: “Fight for Freedom. Stand with Hong Kong.” Morey was expressing a personal opinion in English on a social media platform that is banned in China, but within days he had deleted the tweet and was forced to apologise after fierce criticism from Chinese fans and sponsors.

US National Basketball Association (NBA) games are watched by millions in China, and the Rockets have enjoyed a big following since signing the Chinese star Yao Ming in 2002.

The Rockets owner and the NBA quickly distanced themselves from Morey, in turn drawing the ire of American politicians who accused them of putting profits before principles.

NBA Commissioner Adam Silver has since issued a strong statement supporting Morey’s right to freedom of speech, but that has only worsened the backlash in the PRC. Lucrative sponsorship deals have been suspended. The state-run CCTV Sports says it won’t broadcast NBA pre-season games, and internet giant Tencent will no longer livestream Rockets games.

“We believe any remarks that challenge national sovereignty and social stability do not belong to the category of free speech,” CCTV Sports stated.

Whether the entire league will be blacklisted is unclear. But the NBA now faces a no-win situation that may end up marking another inflection point in Sino-American relations.

Bill Bishop, who writes the well-regarded Sinocism China Newsletter, has tweeted that “basketball and the NBA were supposed to be models of [soft power] engagement, now it looks like they could be at the vanguard of decoupling.” He was commenting on a WeChat forum post that read: “US-China people-to-people exchanges started with ping pong and ended with basketball.”

Whatever comes to pass, the NBA controversy highlights how engaging with Xi’s China while sustaining core values is becoming an increasingly difficult balancing act to pull off.