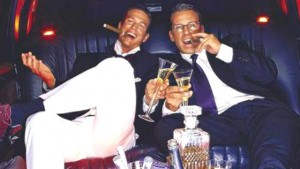 The government is back-slapping and self congratulating in response to news the Australian economy grew in the March quarter — with some commentators saying Australia now has a world-beating record of economic growth.

Sorry, but they should put away the champagne and cancel the party. The state of the economy is in reality pretty ordinary, and is likely not world beating.

First, the government and some commentators are relying on the wrong measure of growth, using headline growth instead of growth per person. And this makes all of the difference in Australia, which has one of the fastest rates of population growth in the developed world.

If we want to compare like with like, we need to take out the effect of the GDP boost from new Australians, and when we do this, the figures don’t look so good. The economy actually shrank in per person terms in the March quarter by 0.1%, with a larger decline of 0.8% in the September quarter. In fact, yearly growth in GDP per person hasn’t been this low since the GFC and has been below the OECD average for the past three years.

We also have other official figures showing a slump in net financial flows into Australia. Foreign investors are cutting capital flow into Australia, and Australians are preferring to invest overseas instead of locally.

You’d like to think the slump in investment would encourage lower taxes on investment — that is, lower company tax — and stopping random unprovoked attacks on business (eg: the major bank levy). But somehow a continuation of the unwarranted celebrations seems more likely.