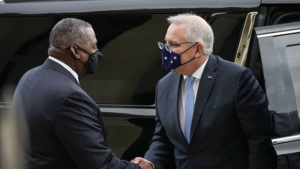 As the fallout from the AUSUK announcement continues to settle, the Prime Minister must be pretty happy with how things went.

The decision is both correct from a policy perspective and proving to be positive politically — a rare double.

Such a big change of direction was bound to upset some people, but there has been either mute acceptance or even support from the groups who may have led significant resistance to the shift from diesel submarines to nuclear-powered ones.

That the French would react so negatively was entirely predictable. This was a tremendously lucrative contract — worth potentially hundreds of billions of dollars over its life — and its abrupt cancellation not only took away that income, but was a hit to French prestige.

However, there was not a lot Australia could do about this. The French military doesn’t have the same level of co-ordination and co-operation with the Americans that Australia and the UK do. It makes a lot more sense for Australia to partner with the US and the UK than the French.

And by the time the subs hit the water, this ‘treason’ will be completely forgotten.

Moreover, the French project has been in trouble for a while. It took nearly a decade for a decision on the submarines to actually be made. The overall cost, which was already high at nearly $40 billion AUD in 2012 was rumoured to be heading towards $100 billion AUD, and the subs would likely not be ready until the 2040s — more than a decade behind schedule.

This decision may in fact solve more problems than it creates; especially given Labor’s in-principle support for the upgraded security arrangements.

Morrison won’t lose much sleep over the interventions of former Labor prime ministers Keating and Rudd. Both have their own reasons for opposing the deal, but neither are very compelling. Keating is as much attacking his own side as the government, and Rudd’s focus is on the short-term diplomatic losses.

Yet, the overriding prerogative of international diplomacy is that Australia must put its own interests first. And those interests clearly include the acquisition of nuclear-powered submarines.

Even when the Future Submarine project was announced in 2009, it was not long before it became clear a bespoke diesel-electric submarine was not the best solution.

The better solution — now, as it was then — was to partner with the US and its successful Virginia class attack submarine.

At the time, Australia was facing significant problems with our six Collins Class subs. Their production had been slow and faulty; requiring costly redesign efforts. There were issues with the combat systems and the noise profile in early trials.

Once in service, the Collins subs had poor availability, and the cost of maintenance was far higher than anticipated or budgeted. Australia also had significant difficulties recruiting and sustaining sufficient crews to operate them.

Although many of these issues have since been resolved, at the time it made little sense to double down on ‘orphan’ submarine classes like the Collins.

Almost no detail was provided about the required specifications of the replacement Future Submarines — just that they had to have greater range and expanded capabilities compared with the Collins Class. And, because they had to be built in Adelaide, they were not to be nuclear-powered.

This requirement contradicted the other specifications: Australian submarines would need to transit 4,000 nautical miles to reach a station in the South China Sea — beyond the typical range of diesel submarines. And once there, a diesel sub would only be able to stay a few weeks before returning.

Moreover, the future of naval engagement, much like aerospace, is clearly in unmanned underwater vehicles and miniature battery-operated submarines. Submarines will likely act more as floating platforms at sea, rather than heading “into estuaries and find out what’s going on there” as a commentator claimed at the time.

Larger nuclear submarines, with greater power output, are better suited to this task.

This rationale makes the relative lack of complaint from South Australia about the potential loss of industry development from the scuppered French bid that much more interesting — or heartening depending on your perspective.

After all, it was the promise of enhanced Australian industrial participation that was one of the key factors in elevating the French bid over the other options. It was also rumoured that a firm commitment to a South Australian build was one of the key promises Malcolm Turnbull made in connection with his leadership bid in 2015.

Yet, since the 2016 French deal sign-off, concerns have been building about the feasibility of this promise. Perhaps South Australians have realised the Future Submarine project was never going to deliver the state a bonanza of jobs and investment.

While there will no doubt be some opportunities for local businesses arising from the AUKUS arrangement, there seems no realistic prospect we will manufacture nuclear submarines in Australia.

In fact, as the arrangements for Australia’s acquisition of these submarines proceed, the easier and better options are likely to involve participating in the US production chain, than a mainly domestic manufacturing program.

Beyond this, it is well past time Australia stopped viewing defence procurement through the lens of industry protectionism. We have wasted 10 years stuffing around with obviously unsuitable options.

It is not surprising the Future Submarine project has been in trouble. The political requirements, strategic necessities and the wishes of the defence establishment have been in conflict for most of the life of the project.

The difference now is that concerns over China’s aggressive military posture and economic belligerence are outweighing the domestic political concerns. This has effectively allowed Morrison to make the decision that should have been made years ago.