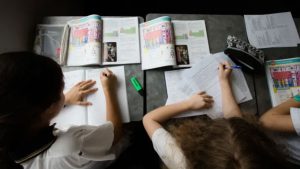 Hot on the heels of disappointing NAPLAN results comes (yet again) international evidence that the problem with our school system is not a lack of money.

The Organisation for Economic Co-operation and Development’s annual Education at a Glance report released today shows that Australia spends significantly more per student than the OECD average — even after taking into account differences in costs and teacher wages between countries. We are 12 per cent higher than the OECD average, exceeding the costs of high-performing systems such as those of Finland and Japan, and spending 11 per cent more than our Kiwi neighbours.

Even in terms of national wealth, we spend more than high-performing Canada, South Korea, Finland and Japan. Accounting for differences in the size of government expenditure — and despite big spending at home on projects such as the National Disability Insurance Scheme — we still spend a larger chunk than most high-performers.

Whichever way you look at it, there is no denying Australia is a big spender. But we have little to show for it.

Last month’s National Assessment Program – Literacy and Numeracy results reiterated that domestic tests fail to show consistent improvement. And it’s worse in international exams, with Australian students declining both in terms of  absolute performance and relative to other countries. All eyes will be on OECD’s next Program for International Student Assessment results in December.

The problem is not that Australian teachers are underpaid. Our teachers earn handsomely compared with their counterparts in other countries. Australia is generally a high-wage country and our teachers enjoy high starting salaries — nearly one-third more than the average across the OECD, according to the data. But although they then receive relatively low increases during their careers, Australian teachers’ pay peaks much earlier than in the top-performing countries. Australians hit the top scale after about seven years, compared with more than 30 years in Japan and South Korea.

Australian teachers are also in the classroom longer than their peers abroad, spending on average an extra hour teaching each day than teachers in Japan, South Korea and Finland.

The OECD’s director of education, Andreas Schleicher, has recently taken aim at two persistent myths that plague education systems worldwide — and to which Australia has been particularly susceptible. One is that spending more money is the way to education success, and the other that smaller classes mean better results.

In dispiriting summary, our results have been sliding despite more funding that has paid for higher teacher salaries and smaller class sizes.

Further reductions to class size are not the solution either, as OECD research shows that smaller classes don’t necessarily help students to learn. At the end of the day, most students will learn better in a relatively large class with a great teacher rather than in a smaller class with a mediocre one.

Even if we wanted to reduce class size, it would come with a cost — the OECD estimates that to reduce average class size by just one student would require Australian teachers to accept salary cuts of about $5,200 a year, and teaching time would have to increase by 53 hours a year.

Let’s put things in perspective. We are accelerating our spending on schools, with little interest in reforming how it is spent. We have lowered the bar when it comes to NAPLAN standards — rather than stretching students, we are shielding them. We have admitted substandard graduates into the teaching profession — in part, to allow for smaller classes.

Added to this, our universities aren’t rigorously training new teachers in evidence-based practices. And our schools and teachers are being buried in red tape.

On all counts, we are heading 180 degrees in the wrong direction.

Reform has to start with improving the quality of teacher training and giving schools more flexibility to pay the best teachers more.

We should also give our teachers fewer classes and more time outside the classroom, so they can prepare lessons better and improve their teaching. And this wouldn’t cost a dime, as it can be offset with slightly bigger classes.

Australia’s education system can be a world leader, but we need substantial reform — and the OECD report shows we’ll first need to put to bed the Gonski myth that funding is to blame for our woes.

Glenn Fahey, formerly with the OECD’s Centre for Educational Research and Innovation, and Blaise Joseph are education research fellows at the Centre for Independent Studies.