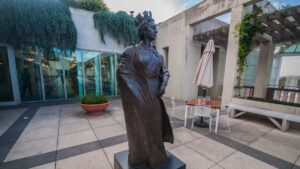 The Australian Republic Movement (ARM) has unveiled its latest model for an Australian republic and, if nothing else, it proves the maxim that a camel is a horse designed by committee.

The ‘Australian Choice’ model involves as many as 11 candidates, nominated by either state and territory governments or the Commonwealth. This cricket team worth of candidates are submitted for popular vote.

Elections will be conducted the same way as the House of Representatives — meaning full preferential voting — and presumably everyone would be compelled to vote in this election.

The ARM hopes their model will deliver “credible candidates who are qualified for the job”. But many distinguished Australians would rightly baulk at running for election for a ceremonial position.

The likely outcome is a bunch of politically aligned nominees, especially from opposing political parties to the Prime Minister.

The “Head of State” — the document is careful not to hint at an American-style President — would serve for five years unless they resign or are removed on “the ground of proved misbehaviour or incapacity”.

However, in exchange for this certainty of tenure, the reserve powers used to sack Gough Whitlam are removed by Constitutional amendment. This is far from the incidental or minor change it is presented as.

The ARM model turns the Head of State into a rubber stamp, with basically no independent authority at all — even to resolve a crisis or remove a Prime Minister acting clearly unconstitutionally.

In some respects, this is the worst of all options. The ARM model will encourage candidates who promise to hold the government of the day ‘accountable’ or will ‘force’ them to take action on certain policy issues (for example climate change), without the legal authority to do anything.

The ARM model would turn the Head of State into a genuine and separate source of authority and influence, yet remove all tools to discharge that authority responsibly.

Instead, some will inevitably use the symbolic and moral authority to embarrass the government; undermining trust in both institutions.

The neutering of the Head of State role also makes any popular vote a sham. What’s the point of forcing everyone to vote for one of 11 politically-vetted appointees if they have no authority to actually do anything?

Of course there is a far deeper flaw in the whole push for a republic: as at the 1999 referendum, no-one can point to a pressing problem that becoming a republic would solve.

Republicans like to portray Australia as backward, with an out-of-touch hereditary monarch, and lacking independence. But Australia is basically a republic in practice now: we aren’t ruled from Britain, we just have a vestigial queen.

The call to replace the Australian Governor General with an Australian President, while keeping everything else the same, therefore lacks any sense of urgency. Especially approaching the two year mark of a global pandemic.

Moreover the ARM model is needlessly complex and unwieldy, partly because it is attempting to be everything to everyone.

You get the sense that the ARM would prefer something similar to the 1999 model, but have tacked on a popular vote to capture republic-supporters who want a directly-elected Head of State. Yet some clearly don’t trust Australians to make good choices if free votes were allowed — hence the limited nomination.

The nomination process is further complicated by what appears to be an attempt to get over the ‘majority of states’ referendum hurdle: the states are to be given 8 of 11 nominations.

No reason is given for handing the states so much say in this process, and it makes little sense: the states are a separate sovereign sphere of government, and rightly have no role in the current selection of Governor-General.

And, while the smaller states may initially appreciate the right to nominate candidates, if it comes down to a state-based contest, you can expect almost every elected Head of State would be from either Victoria or NSW.

ARM polling claims just 18% of Australians would vote no to this model. This is compared to 57% who would vote yes — and was the only model surveyed with support of 50% or more.

Yet these polls actually outline just how weak the ARM case really is, with both parliamentary appointment and direct election favoured by less than 45% of respondents to the ARM poll, and more than 30% in opposition even in the absence of a case against change.

Indeed, after the Australian Choice model, the option with the fewest committed votes against is to abolish the Head of State altogether!

It seems impossible that this complex a model will maintain a high level of support when challenged. Certainly the initial response to the Australian Choice model in the press or social media has been muted at best.

Perhaps part of the reason the republican movement no longer commands focus is that, in large part, it has been eclipsed by the Indigenous recognition campaign.

Regardless of the reason, initial indications are that the release of the new Australian Choice model won’t be the spark that ignites the cause.

Labor has previously committed to holding a referendum on the issue; but such promises are always easier in opposition. Will they really spend precious political capital convincing people to back this model?

Moreover, the success rate on contested referendums is awful — and there is no reason for a federal Coalition government to get behind this.

The ARM has clearly done a lot of work on its Australian Choice model. But it’s simply not clear that they are any closer to making a republic relevant to everyday Australians.