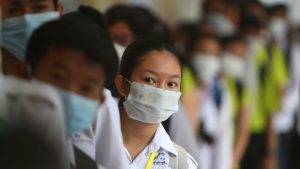 Reflecting the biases of Chinese sponsors, the ARWU is based entirely on hard research metrics. There’s no mucking about with reputation surveys or student satisfaction. It’s all about Nobel prizes, citation counts, and papers in prestigious journals. Your award-winning Oxford University Press book on Aristotle’s metaphysics doesn’t even get counted.

So how did Australian universities, with their real (but uncounted) strengths in the humanities, law, music, and art, rise to third in the world in the science-heavy ARWU rankings?

In a word: money. For the past two decades, Australia’s top universities have been buying up top researchers from around the world, offering them world-class facilities and teaching-free career tracks in exchange for bringing their publication portfolios to Australia. As a result, the country is now a research powerhouse to rival the United Kingdom.

Yet Australia’s university vice-chancellors never tire of complaining about declining levels of government research funding. So where did all the money come from to finance Australia’s march up the rankings? In two words: Chinese students.

Chinese student enrolments in Australian higher education have increased six-fold in the past two decades. Chinese students almost always pay full fees and are disproportionately concentrated in high-margin course-work master’s programs. At least eight Australian universities rely on Chinese student tuition revenue for 11 to 26 per cent of their total revenue.

The coronavirus epidemic, and the travel bans it prompted, threaten to derail that particular gravy train. So it comes as no surprise that university vice-chancellors have lobbied aggressively to have Australia’s travel ban lifted for Chinese students. This, despite the fact that most have prohibited their own staff and students from travelling to China — or even to Hong Kong. And despite the fact that university studies have been suspended in China and Hong Kong themselves.

How can it be that Hong Kong and Australian vice-chancellors have come to such radically different evaluations of their ability to safely manage coronavirus exposure? In another two words: moral hazard.

Moral hazard is the expectation that organisations (and their leaders) will reap the rewards of their successes while others will bear the burdens of their failures. If the government lifts its travel ban and 100,000 Chinese students fly into Australia, university revenues will continue the robust growth that has propelled Australia up the international rankings.

But if those students introduce coronavirus into the general population, Medicare — which means taxpayers — will pick up the bill. If Australian universities were required to reimburse the government for the costs of treating any coronavirus cases that could be traced back to their Chinese students, they would probably be much less eager to lift the travel ban.

Moral hazard is also how Australia’s top universities got into the coronavirus bind in the first place. They ran enormous financial risks by recklessly expanding Chinese student numbers over the past 20 years. Many of us have warned about the real possibility — and potentially severe consequences — of a sudden drop in Chinese enrolments. Our warnings were ignored or dismissed.
Now another moral hazard is opening up: the possibility of a government bailout for Australia’s beleaguered universities. Any proposals along these lines should be nipped in the bud.

Organisations that pursue risky rapid revenue growth should put aside reserves for a rainy day, or use their windfalls to buy insurance. Much of the universities’ vaunted war chest of financial reserves is nothing of the kind. The University of Sydney’s reserves, for example, largely comprise revaluation adjustments for the university’s land. If the government does decide to provide financial assistance to universities affected by the coronavirus epidemic, it should do so by offering short-term loans to augment universities’ reserves at penalty rates of interest. It is important not just to preserve universities’ solvency, but to change their behaviour. Top research rankings mainly benefit vice-chancellors’ egos. The core business of universities should be education.

Salvatore Babones is an adjunct scholar at the Centre for Independent Studies, an associate professor at the University of Sydney, and author of the paper Australia’s Export Exposure to China’s Coronavirus Epidemic.