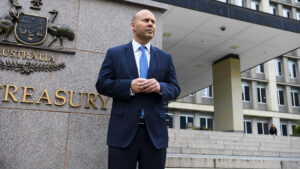 We are just a couple of days out from the budget and things are eerily quiet.

Precious little detail has been leaked to the media. A few minor pieces have come from MYEFO’s ‘Decisions taken but not yet announced’. We know the government plans to announce some cost of living measures, and we know they don’t want to bring forward the tax cuts.

Some money will be spent on infrastructure — including regional internet — and some on defence. But both areas are notorious for multiple announcements of the same project, and spending that will not actually occur for several years after it is promised.

In normal times, we would have been drip-fed budget leaks for several weeks by now. Indeed, in some budget years, opening the documents the night of the budget was more about confirming what had already been reported than finding new policies.

For example, when Scott Morrison was treasurer in 2018, he spent several weeks touring the country prior to budget night dropping hints about what would be announced. We had a pretty good idea about some of key elements of the tax reform package well before budget Tuesday.

In recent years, infrastructure spending, tax cuts, support for business, even new welfare support initiatives have all been as good as announced before the budget.

The central element of this strategy was that to ensure that the government got due media attention — and credit — for each of its positive measures, while trying to defuse anger for the unpopular measures by warning about them ahead of time.

It’s far less risky than holding most (or all) of the information until budget night, because it allows the government greater control over the budget narrative.

The 2014 budget is a salutary warning: it was, in effect, a huge policy dump on the night of the budget, despite prior leaking. Once the shock wore off, the anti-government narrative on ‘unfairness’ swamped all other messaging.

So much so, that those opposing the government have attempted to plaster every subsequent budget with the same label — even when the claims of unfairness were paper thin.

From the perspective of those who would prefer less government, it would be good if this softly-softly budget was a conscious choice by the government to de-emphasise the budget as the be-all and end-all of political management.

On the contrary though, other reasons seem far more likely.

One distinct possibility is that the government has been more than happy to finally be off the front pages of the newspaper in the lead-up to the election campaign.

News of the conflict between Russia and the Ukraine has dominated the press for weeks. The conflict has sharpened the public focus on defence and security issues — a welcome development for the Coalition, as defence is one of their traditional strengths.

It is not just that the bullying claims may attenuate Labor’s likely attacks on Morrison on issues of gender, which dominated political discourse earlier this year. Excuses of factional opposition might work for those immersed in the day-to-day of politics, but regular people are as deeply turned off by factional politics as insiders are obsessed with them.

There are many downsides from the triumph of politics as a vocation over politics as an avocation, but one is surely the rise and rise of internal factional politics.

Of course, another downside is the spectacle of budget night as political theatre. You might well ask how we have become so enthralled by what should be a routine exercise in government accounting.

One wonders if there would be more scrutiny and less self-interest if budget measures were debated and passed separately. In that sense, it is worth remembering that ‘enthralled’ is a word with two meanings: captivated and enslaved.

Another possibility is that the government intends to use the budget to paint a rosy picture of the economy and prospects, which doesn’t demand a massive intervention in terms of new initiatives.

In this scenario, the forecasts will show robust economic growth, predict strong wages, low unemployment and a narrowing deficit over time. Inflation will be contained in the medium term. Debt will grow but such growth — once labelled disastrous — will be alleged to be ‘sustainable’.

Some key groups will get minor handouts; given demographics and voter patterns this seems almost certain. But overall, the government will seek to ‘stand pat’ in the run-up to the election.

Of course it’s also possible that the government is keeping their powder dry and Tuesday’s budget will provide the fireworks missing from the last few weeks.

What would be preferable by far are structural reforms that actually de-centre government from the economic process.

One good example would be the indexation of tax thresholds to eliminate bracket creep. Such a policy would have a relatively low impact on the budget bottom-line, but one that would increase significantly over-time.

It would stop governments from artificially balancing budgets through sneaky tax increases. It would also stop the endless tinkering of drip-fed tax cuts every few years.

Another example would be to firmly push back against attempts to make inflation a fiscal problem. Welfare payments are already automatically indexed to inflation — so there is no need for government to step in and offer further assistance.

Moreover, managing inflation is the core responsibility of the Reserve Bank and government should neither meddle in it, nor fail to hold the RBA to account for its action (or inaction).

The core problem is that government has been lured into trying to do too much for too long. While this has been supercharged by the pandemic, it has been a problem for a number of years.

It is hard to imagine that a marginal government trying to win a fourth term at an upcoming election will be the one to finally stand athwart the budget yelling ‘stop’ (to adapt a phrase). Yet the eerie silence does make one wonder…