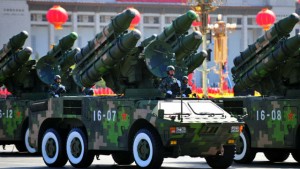 A tectonic shift in global power is under way, and it is provoking fear and loathing in Washington.

The spectacular failure of US attempts to dissuade allies and partners from signing up to the US$100 billion Chinese-led Asian Infrastructure Investment Bank (AIIB) is the latest litmus test of awkward US impotence in the face of China’s rapid resurgence.

Opposition to the AIIB probably reflects US frustration with its relative decline, but this latest sign of the emergence of a post-American Asian order should also prompt fresh reflection on the strategic implications of China’s rise.

But the indirect and long-term threats posed by China’s rise are dangerous—and steadily becoming more dire.

Due to Beijing’s uncompromising commitment to seizing contested land and sea, Asia’s territorial disputes now form a rim of geostrategic fire stretching from the East China Sea through the South China Sea and on to the Indian sub-continent.

As demonstrated by the aerial and naval brinkmanship and divisive diplomatic stoushes between China and Japan, the Philippines, Vietnam, India and other nations, Beijing’s determined territorial revisionism jeopardises peace and security in the Asia-Pacific, while also imperilling crucial Southeast and East Asian shipping routes on which Australia depends.

Canberra’s security treaty with Washington calls on Australia to act to defend the United States in the event that its territories, armed forces, public vessels or aircraft are attacked.

Combined with de jure and de facto US security guarantees to Japan, South Korea, Taiwan and the Philippines, and testy territorial disputes between these nations and China, Canberra’s alliance obligations to Washington could easily see Australia dragged into a war with China.

For example, given that US President Barack Obama has explicitly stated that the US-Japanese security treaty applies to the Japanese-administered but Chinese-claimed Senkaku/Diaoyu islands, a Chinese assault on this territory would likely entail US military involvement that could in turn activate Australian security commitments.

The global military hierarchy is undergoing a radical rewrite, and China is set to end up on top.

Chinese military spending can be expected to balloon to a staggering US$2.1 trillion by mid-century, which would make China’s defence budget the world’s largest by a wide margin, and roughly the equivalent of 124% of likely US military spending.

Since World War II, the United States has underwritten the Asia-Pacific’s relative peace and security as the hub of a system of alliances and partnerships that includes allies like Japan, South Korea, the Philippines, Thailand and Australia, and security partners like Taiwan and Singapore.

Notwithstanding the much-vaunted US ‘pivot’ to Asia, officials representing key US allies and partners in the region now quietly—and sometimes publicly—wonder whether Washington will be a reliable security guarantor in an age of Chinese military primacy.

These growing regional strategic uncertainties are compounded by existential questions about the future of all-important Sino-US relations.

China and the United States have both signed up to a so-called ‘new model of major power relations’ that will apparently ensure peaceful and mutually beneficial ties between the globe’s two greatest powers.

But Beijing and Washington have contradictory visions of this ‘new model’. China interprets it to mean that the United States will gracefully step aside and allow it to assume its rightful position as the world’s premier power, while Washington takes it to mean that Beijing will not challenge the US-led liberal world order with its revisionist aspirations.

Although war is by no means inevitable, rivalry and misjudgement are increasingly likely as Asia-Pacific nations navigate these brave new strategic uncertainties.

Chinese President Xi Jinping regularly seeks to sooth fears about China’s rise. Using especially emphatic terms during a visit to Germany last year, Xi said China is not a “terrifying Mephisto who will someday suck the soul of the world”.

Xi is, of course, right. China has no interest in entirely upending the Asia-Pacific’s international system.

Yet as China rises, peace and security are jeopardised by what no nation in the region wants: A war over desolate islets in the East China Sea or spiralling Sino-US tensions.