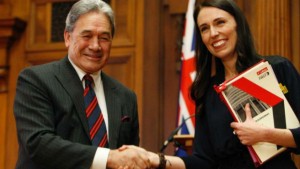 The tragedy of New Zealand’s election outcome is not just that a stable and successful nine-year government has lost power, despite scoring more than 8% more votes than the Labour opposition. If NZ had Britain’s first-past-the-vote electoral system or Australia’s preferential voting system instead of its quirky German-style mixed-member proportional representation system, the conservatives would have won a landslide victory.

The real tragedy is that the centre-right National Party lost power, despite presiding over dramatically improved living standards. As a result, Wellington is now run by a 37-year-old former president of the International Union of Socialist Youth, who’s in cahoots with the left-wing Greens party and the populist New Zealand First Party.

Labour Prime Minister Jacinda Ardern claims market capitalism has failed NZ. The record suggests otherwise. For the best part of a decade, prime ministers John Key and Bill English had passed a productivity-enhancing reform agenda: the GST-tax switch, which lifted the GST rate to 15% in exchange for cuts to top income and company tax rates; partial privatisation of electricity assets and the iconic Air New Zealand; comprehensive welfare reform; and workplace reforms that made it easier for small business to hire and fire.

NZ had also emerged from the global financial storm of 2008-09 without resorting to the type of big-spending and debt-ridden ‘stimulus’ policies that characterised the responses of other western nations. Instead, Key and English believed in the market mantra that improving productivity is the best way to grow a nation out of recession.

The result: the budget went into surplus, the trans-Tasman wage disparity closed sharply, unemployment fell to 5 per cent, and growth averaged a healthy 3-4 per cent in recent years.

It is not clear how an unwieldy three-party coalition will govern in Wellington. But its interventionist agenda of higher taxes, free university education and labour-market re-regulation will undermine NZ’s prosperity of recent years.

Tom Switzer is a senior research fellow at the Centre for Independent Studies and presenter at ABC’s Radio National. His panel discussion on the NZ election outcome was aired shortly after Winston Peters’ announcement on October 19.