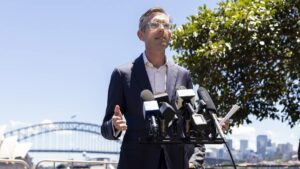 It’s common at this time of year to seek wisdom in reflective aphorisms and clichés. “Make each day better than the last” … not exactly the kind of advice that’s easy to follow when you’re facing the 93rd consecutive day of lockdown and you can’t remember what month it is.

But not everyone had a bad 2021, and it’s time to recognise the winners and losers of the year.

Of course, the biggest winners are the economic rationalists who have clearly influenced government to use their fiscal windfall wisely and prudently reduce the deficit. Just kidding. The government spent all its ‘profits’ from the economy bouncing back better than expected on expensive boondoggles and ‘not-yet-announced’ election promises.

And these days you’d have better luck finding a unicorn than sighting an Australian economic rationalist in the wild. Looks like we are all Keynesians again.

The actual big winners this year were far easier to spot, mostly because they sombrely fronted daily press conferences announcing COVID cases and competing with each other as to whose lockdown was the biggest. I’m talking about the state premiers.

Gone are the days when the only metric for a successful premier was how much cash they chiselled out of Canberra. These days they are the masters of the known universe, wielding powers more akin to a divine monarch than federalism’s left-overs.

Mark McGowan has come closer to achieving West Australia’s goal of independence from the rest of the country than anyone since Sir James Mitchell won the 1933 WA referendum on secession.

Dan Andrews has convinced parliament to give him even less scrutiny and oversight, despite the fact that no-one could quite remember who made the decision to implement a police curfew, and his strict lockdown utterly failed to halt the delta wave.

Dominic Perrotet seamlessly stepped into yet another breach created by ICAC and is advancing his domestic non-Covid agenda as effectively as anyone.

Of course, if 2022 is the year of Omicron, the state premiers may wish they were less successful in 2021.

Even so, they would be wise to be cautious in what health advice they listen to. Certainly those peddling disaster modelling, hyping up calamity in the press, or falsely claiming the reason delta couldn’t be stopped in Sydney was the lockdown just wasn’t hard enough or early enough, were losers this year.

On the flip side, the vaccines and their developers were massive winners this year. The distribution and development of effective vaccines again COVID has been a genuine triumph, far sooner than we dared even hope mid-2020.

It is possible that more could have been done sooner, especially here in Australia. But we should not let the perfect be the enemy of the good. This is not a failure, it’s a success story.

Even Donald Trump has been pushing the line recently that the vaccines are a tremendous achievement that should be celebrated. And although he is not a winner this year, in this at least he is right.

His successor and one-time rival, Joe Biden, sure had a bad one. For someone who controls the House and the Senate, and had a predecessor who dabbled in insurrection, Biden could hardly have had a worse year.

His withdrawal from Afghanistan was a disaster. His massive spending omnibus / domestic policy agenda — Build Back Better — is stalled out in the Senate. His party is divided. His relationship with his Vice President is clearly strained.

And he’s clearly not as incisive and committed as he was in years past. At times he looks like a passenger lost at sea, rather than the captain of the world’s largest superpower.

Things have gotten so bad, those around perennial loser Hilary Clinton are making noises about another run in 2024!

If Biden can draw a positive, though, it’s that China’s ambitions have also suffered a set-back.

The Chinese government has been throwing its weight around for a while now. It is clearly exercising significant influence over international bodies and agency — for example the World Health Organisation — and its economic diplomacy through loans and grants has given it power to push its world view forward.

Yet, its attempt to strong-arm Australia and bring our political class to heel has been a failure. Given the importance of Chinese trade to the Australian economy, and the extent to which some sectors in particular are dependent on Chinese demand, Beijing might have expected that Canberra would be very careful when China started disrupting that trade.

The reverse has been true. Not only has the Australian economy far out-performed expectations, but Beijing’s tactics have pushed Australia into a new strategic alignment with the Americans and the British.

Despite the blow-back with the French, the AUKUS deal finally corrects Australia’s procurement mistake. China has, in some respects, pushed us to make the decision we should always have made in respect of nuclear submarines.

Kevin Rudd and Malcolm Turnbull, whatever they may personally have felt about the matter, were constrained by politics to commit to production of conventional submarines in Adelaide. Morrison is not.

And it has been clear for a long time that nuclear powered submarines are a far better fit for Australia’s needs than a bespoke diesel sub that won’t’ exist until the 2040s.

We are past due for a year with more winners than losers.