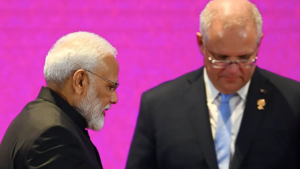 The relationship between India and Australia has grown rapidly in recent years, underpinned by a convergence of security interests in the Indo-Pacific and complemented by their membership of the revived Quad that includes Japan and the United States. Yet the unfolding transformation of Delhi-Canberra ties remains poorly understood.

Successive administrations in Washington since the early 2000s have bet on the centrality of India’s role in the newly-constituted Indo-Pacific and the Quadrilateral framework to shape this vast littoral. These two innovations are rooted in the recognition that Asia and its waters cannot be secured within the old geographic framework of the Asia-Pacific, and that longstanding US bilateral alliances and ASEAN multilateralism must be complemented by an effective Indian role.

Drawing India into regional security politics is necessary to construct a balanced Asia that has been destabilised by China’s rise and the ever-bolder assertion of Chinese power.

The larger context of Delhi-Canberra ties began to change only in the 2000s. Despite steady progress, however, neither side was willing to face up to emerging problems in their China relationships.

That reluctance was overcome by China’s aggressive actions against both India and Australia in 2020.

China’s economic coercion of Australia and its bid to change the disposition of the disputed boundary in eastern Ladakh forced Canberra and Delhi to take a fresh look at their respective ties with China. Delhi discarded its ambivalence about the US, the Quad and Australia. Canberra was no longer willing to fudge the China question.

India appreciates the strengthening of regional deterrent capabilities to limit China’s maritime assertiveness.  While India has neither applauded or condemned AUKUS, there is no denying that the trilateral alliance widens Canberra’s options. Delhi has no quarrel with that.

In the past, Delhi and Canberra deferred to the sensitivities of Beijing and were willing to impose constraints on their own policy options — but after 2020, neither is prepared to cede a veto over their security policies to Beijing.

At the end of the Cold War, the Indian political class eagerly embraced Russian and Chinese efforts to promote a ‘multipolar world’ and limit American unilateralism.

Today, they see the importance of constructing a ‘multipolar Asia’ that would limit Chinese unilateralism and prevent the emergence of a new political hegemony in the region.

Delhi too sees the involvement of Britain and Europe as necessary to correct the imbalance of power in Asia triggered by the rise and assertion of China.

India under Modi has begun to shed its traditional allergy to the Anglosphere and is eager for more wide-ranging cooperation with its constituent parts.

Asia is not synonymous with China and neither Delhi nor Canberra can be compelled to accept deference to Beijing as the only option in their regional policies.

Both have a stake in a multipolar Asia that can only be sustained today with the presence of the US and the involvement of Britain and Europe.

At the same time, India brings the necessary material heft and political will to strengthen, over the longer term, the regional dimension of the Asian balance of power.

In the past, India’s collaboration with the West was under the aegis of empire with little agency for its nationalist elite. India today comes to the Quad as a power in its own right and with political agency to shape the regional balance of power.

Raja Mohan is Director of the Institute of South Asian Studies at the National University of Singapore. He was formerly Professor of South Asian Studies at the Jawaharlal Nehru University, Delhi and the Rajaratnam School of International Studies, Singapore. He is the author of the Centre for Independent Studies Paper, Between Geography and History: Delhi and Canberra in Indo-Pacific Security.