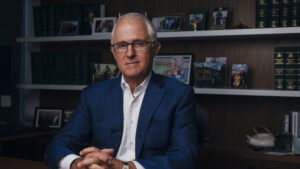 It’s important, in the interests of constructive debate, to recognise when political leaders who have been the object of serious criticism in the past turn out to have done something right and to praise them fully for it.Malcolm Turnbull has had his critics over the years, including this writer. I’ve said that, among other irreverent things, as prime minister (2015-18) he resembled – gasp! – Kevin Rudd: adrift and at the mercy of events.But credit where it’s due: it’s now absolutely clear that Turnbull’s policy towards China was very much in Australia’s best interests.

Indeed, Turnbull established a model for other states to emulate as the US-China security competition intensifies. He also, crucially, avoided the kind of political tub-thumping posture towards our largest trade partner that sometimes characterises his successor’s approach. Australia, as the former PM counsels, must always be “the reasonable, rational party, open to rapprochement, pragmatic and practical”.

Before Turnbull, Coalition and Labor governments embraced a policy of engagement towards the People’s Republic. That meant Australia took advantage of the lucrative China market and, as a consequence, weathered the global financial storm of 2008-09. Engagement was also premised on the liberal idea that the more China embraced market economics and integrated with the world, the more likely its rise would be peaceful.

However, as China became increasingly authoritarian, aggressive and nationalist, Turnbull rightly changed course. Whereas other nations are now seen to have performed the kowtow towards Beijing, and in doing so helped China through its unimpeded trade fund a military expansion that has turned it into a viable great power – and as one watches its activities in Africa, potentially the South Pacific, into a great imperialistic power at that – Australia played no part in this highly dangerous development.

It was especially wise of Turnbull’s government to block bidders from China for Australia’s largest electricity network, to bring in foreign interference laws that kept Chinese influence at bay and to keep Huawei out of the 5G network, which could have ended up holding the country to ransom.

Critics say Turnbull unnecessarily poked the eye of our largest trade partner. But if his (bipartisan) policies to strengthen espionage laws, outlaw foreign political donations and criminalise efforts to interfere in our democracy annoyed Beijing, so be it. After all, they were a direct response to widespread allegations that China sought to influence our elections, media and universities. According to intelligence, foreign interference had been exceeding levels seen at the height of the Cold War.

As for 5G, it was widely believed that Huawei could gain an edge in developing next-generation technology. And because the Chinese telecommunications firm does not operate independently of its government, it posed genuine cyber-security threats. If Chinese military or intelligence officials direct Huawei to compromise a foreign country’s 5G network, it would comply.

Some critics say that although the policy substance was fine, the policy articulation was not. Never mind that, as Turnbull stressed, the foreign interference laws were not explicitly aimed at China or our vibrant ethnic Chinese community. And because Chinese telecommunications technology posed a security risk to the alliance, Turnbull had every right to notify promptly the US president of his consequential decision.

If Turnbull were a Trump lickspittle, how do his critics account for Canberra’s decision to reject US requests to carry out freedom-of-navigation patrols in the South China Sea 12-nautical-mile security zone? Leave the heavy lifting to Uncle Sam.

At the same time, Turnbull helped revive what has come to be known as “the Quad” – India, Japan, Australia and the US – a group of the four maritime democracies worried about China. And with Trump’s withdrawal from the Trans-Pacific Partnership, Turnbull ensured the pact endured in the face of a rising China. All sound initiatives.

Did Turnbull really indulge in the rhetoric of anti-China moral indignation? Not if we take seriously his conciliatory addresses, especially in mid-2018 to the Australia China Business Council (“the Australia-China relationship … is built on family”) and at the University of NSW (“it is a mistake to assume that China will assume … the role of the Soviet Union in the Cold War or that the US and its allies … should seek to contain China”).

As for Turnbull’s conservative critics, they all too often complain about his undermining Scott Morrison. Yet Turnbull says it is “misguided” to criticise his successor for upsetting Beijing by calling for an independent inquiry into the pandemic’s origins. As he makes clear in the new edition of his memoirs: “The offence taken by Beijing to Morrison’s call was utterly unreasonable and confected.”

Turnbull’s nuanced point, moreover, is that “it would be very unwise for Morrison to allow Australia to be positioned as the tip of the spear in a new international coalition to combat China.” That’s a perfectly sensible position to take for a resource-rich middle power at the foot of Asia: after all, China remains the world’s biggest consumer market while Washington remains frighteningly polarised. The spectre of Trump haunts American politics.

For now, though, Beijing is likely to bully Australia when it suits its purposes to do so. But Canberra’s resilience to any such attempts will be greater as a result of Turnbull’s prudent strategy towards China.