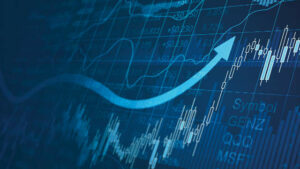 It increasingly looks as if Australia is experiencing a sharp burst of inflation, much like what happened in the US and Europe over the past six months.

The next consumer price index report in late April should confirm further broad-based price rises across the economy. Early calculations suggest a trimmed mean result as high as 1.5 per cent in the March quarter. This will leave the annual rate fast approaching 4 per cent and take core inflation well above the Reserve Bank of Australia’s 2 per cent to 3 per cent target range.

The company earnings season has been replete with anecdotes and data points highlighting continuing severe supply chain disruptions, rising import costs and big jumps in consumer prices across a range of goods and services.

The Russian invasion of Ukraine will only add to the global inflationary pulse, with many commodity prices rising to new cyclical highs in the past two weeks. Australia, in particular, stands to benefit from rising wheat, oil and gas prices over the months and years ahead.

Import price data highlights that these global price pressures are now penetrating the Australian economy. The import price index for inputs into domestic production rose 28 per cent in 2021, the highest annual growth rate since the data was first collected in 1984.

The apparent loss of this critical buffer between global markets and the domestic economy might prove highly inflationary as rising global goods and commodity prices are not being offset for Australian consumers by a stronger Australian dollar.

Wages in 2023 will be critical

Australian inflation is looking increasingly as if it will rise to at least 5 per cent in 2022, well above policymaker and market expectations. This will stress the anchor of inflation expectations.

Last week’s wage price index for 2021 reported historically low wage growth of 2.3 per cent that in no way, shape or form is a threat to the RBA’s 2 to 3 per cent target for final prices. But wages in 2021 are little more than a starting point. It is not central to the policy debate if the economic operating environment is changing, and changing it is.

Non-labour inputs into the production process are driving inflation in 2022. Cost of living pressures are rising at pace.

It is wages in 2023 that will be critical in determining whether the temporary price spikes from the global economy of 2021 and 2022 feed into a more persistent lift in cyclical inflation pressures.

The more severe the current inflation pressure, the less sensible it is for the RBA board to maintain its policy of waiting to see the “whites of the eyes” of inflation, which I presume means undesirably high wage growth. The potential costs of this strategy going wrong are rising with every higher-than-expected CPI report.

It is ironic that markets are linking the conflict in Ukraine with a lower probability of rising interest rates.

The real inflation risk scenario comes into play if the secular backdrop is shifting. This will be a major shock to policymakers who, for almost 20 years, have been focused on understanding what a disinflationary environment means for monetary policy.

Policymakers are taking comfort from the assumption that the structural features of the global price-setting environment have been disinflationary. But what happens if the secular backdrop turns inflationary?

Policy settings will be well off mark, never close to neutral, let alone a tight stance that may be required in a few years if inflation and wages persist above desired levels. That’s basically what happened in the 1970s – inflation got away from central banks.

The war in Ukraine is also instructive on this front. Deglobalisation is inflationary and geopolitical conflict is historically linked to deglobalisation. Any uncertainties about the geopolitical trajectory and the stance of Russia and China within the global order have been done away with this past week.

Globalisation is just one of many secular assumptions underpinning current central bank comfort will ultra-easy policy. But it is not the most important.

The most powerful force that could be creating a new inflationary structural backdrop is demographics. A growing scarcity of workers will drive consistently higher labour costs within the economy for decades to come.

It is ironic that markets are linking the conflict in Ukraine with a lower probability of rising interest rates.

If anything, the tragedy playing out in front of our eyes is a reminder of the big changes running through the global economy, changes that are utterly inconsistent with zero interest rates in many economies, including ours.

None of this means the RBA should raise rates tomorrow, although the earlier the RBA starts the process of policy normalisation the better. The window for the first cash rate increase opens after the first quarter CPI. It would take a major shift in the trajectory of the Australian economy to delay the first hike beyond August.

Rate rises aren’t urgent, but a shift in the RBA’s rhetoric and communications strategy certainly is. They have already done huge damage to their credibility over the past four months.

Constantly defending their policy position is only making matters worse. The events of the past week should be used as a trigger to reshape the narrative and open the door to higher short-term interest rates in the months ahead.

Warren Hogan is managing director of EQ Economics and economic adviser to Judo Bank. His report The Return of Inflation is published by The Centre for Independent Studies on Monday.