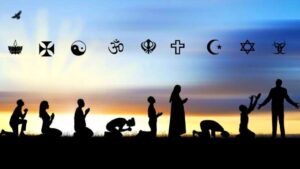 Family members stranded overseas are going to miss out; and now it’s suddenly got harder for the rest of us. Until just a few days ago, Christmas this year looked as though it might feel almost normal as Covid restrictions were lifted in readiness for the festive season. Recent Covid spikes in NSW, however, have put a check on all that with the holiday plans of many now up in the air.

Even so… Australia is fortunate to have got through this exceptional plague year with only a fraction of the trauma still being experienced by people in the United Kingdom and the United States.

But for some months — until the most recent easing of restrictions — Aussie religious leaders worried that the strict rules imposed by governments unduly and unfairly impacted the lives of the faithful.

Referred to delicately by religious leaders as ‘inconsistencies’, these restrictions meant you could go to the gym or attend a sporting event but you couldn’t go to church, synagogue, or mosque.

Happily, a series of reasonable accommodations was reached between politicians, bureaucrats, and religious leaders without the need to resort to the courts.

But things were very different in the USA. The governors of New York and California have had their knuckles rapped by the US Supreme Court, which ruled that those states’ strict limits on religious gatherings strained legality.

Even to Australians, who are generally less prickly about their rights, the example of New York’s unfair treatment of religious activities compared to secular ones seemed to defy common sense.

There, liquor stores, bike repair shops, and acupuncturists were allowed to open; but the doors of places of worship remained firmly closed. “Who knew public health would so perfectly align with secular convenience?” observed Justice Neil Gorsuch pithily.

Scrutiny by the Supreme Court became essential to uphold fundamental constitutional freedoms, including the freedom of religion, which were severely threatened by public health restrictions.

Of course, Australians have had their share of impositions this year, some of which also strained the bounds of common sense — for example, when essential cross-border medical services were blocked.

But we are fortunate that, for the most part, political leaders have been amenable to the appeals of faith leaders for greater alignment between restrictions on secular and religious activities.

Even so, protection of religious freedom in Australia demands careful vigilance — especially given earlier stern covid restrictions on faith-based gatherings which have been lifted only gradually.

Religious leaders are now calling on Scott Morrison to honour his 2019 election pledge to pass a religious discrimination bill to protect all faith-based organisations and religious believers.

We need to be resolved about defending religious freedom because Covid-19 has shown how easily it can be forgotten. The pandemic may have eased; the need for vigilance about liberty remains.