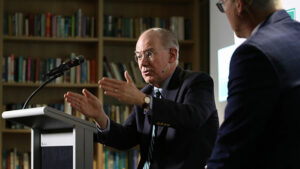 Rarely in history has an academic been as intellectually vindicated as John Mearsheimer. Two decades ago, his bold thesis was that great-power rivalry was not over. Like many prophets, Mearsheimer was ignored. But he accurately foresaw the intense Sino-American security competition that the corona­virus crisis has exposed.

In The Tragedy of Great Power Politics, the veteran University of Chicago political scientist argued that, notwithstanding the collapse of the Soviet empire, insecurity and conflict remained inevitable by-products of the anarchic international system. As its power increase­d and definition of national interests grew, China would be more assertive in areas on which its security and prosperity depended. As the global hegemon, the US would go to great lengths to stop the rising power from dominating Asia. According to the headline of a Mearsheimer article on this page in November 2005: “The rise of China will not be peaceful at all.”

In those days, Mearsheimer’s realism was at odds with the zeitgeist. This was the era of an increasing­ly globalised and border­­less world, where inter­dependency and integration were the overriding realities of inter­national relations. State rivalries and military power seemed to make ­little sense. The prevailing wisdom was that rapid economic growth almost ensured the emerg­ence of a democratic polity in China, as it had in Taiwan and South Korea. The more China embraced­ global capitalism, the more likely it would integrate peacefully in the rules-based international order.

However, Mearsheimer never suffered the “great delusion”, as his most recent book is called. ­Almost a lone voice in the post-Cold War era, he argued that international life remained the kind of brutal competition for power that it had been since ­Thucydides. Failing any kind of world government to enforce rules and norms, great powers find it impossibl­e to trust each other. The tragedy is that striving for security leads to heightened tensions.

For Mearsheimer, the consequences were clear: by growing ­enchanted with the China market, the world was just feeding the beast. Far from becoming a ­responsible stakeholder in world affairs, Beijing was bound to upset the strategic sensibilities of neighbouring states, from Japan and South Korea to India and Vietnam. As a result, the US should pivot to Asia, deepen security ties with allies, develop new strategic partnerships with old foes and draw a line in the sand — in this case, water — by checking Beijing’s ambitions.

Alas, after America’s Cold War victory, both Democratic and Republican administrations indulged in what Mearsheimer’s academic colleague Stephen Walt calls the “hubristic fantasy” of global “liberal­ hegemony”, which both scholars warned would cost the US dearly in prestige and influence.

It was during this time that Mearsheimer and I became friends: in July 2002 he persuaded me that a war to topple Saddam Hussein’s regime would be foolish and catastrophic. (At the time, I was opinion editor of these pages and, although our editorials remained hawkish, our commentary sections, unlike those of our anti-war competitors, were a ping-pong table for both sides in the debate.)

Mearsheimer was as right about Iraq and America’s other Wilsonian misadventures in the Middle East as he was about picking a fight with Russia: NATO expansio­n eastwards just drove Moscow into the arms of Beijing and has made it more difficult for Washington to make Asia its first strategic priority.

Meanwhile, China’s rise continued unabated: think of its escal­ating defence build-up, per­sis­t­ent cyber-espionage and global meddling, pumped-up nationalism, huge propaganda and dis­infor­m­ation campaigns, pending forceful takeover of Hong Kong and growing intimidation of Taiwan, aggressive­ build-up of military outposts beyond its border in the South China Sea, and so on.

“Mearsheimer’s warning has come to pass: we starry-eyed proponents of engagement have been mugged by reality.”

How often do you hear talk about growing tensions­ between China and not just the US and Australia but many other parts of the world? In a new Centre for Independent Studies paper, one of Australia’s leading security experts, Alan Dupont, says the US-China standoff over trade, technology and strategy has precipitated a new cold war.

Many people blame China’s assertivenes­s primarily on its autocratic leader, Xi Jinping. What they don’t understand is that the US-China rivalry, as Mearsheimer foreshadowed two decades ago, is at root a function of the structure of the international system, not personalities or the pandemic. That’s why most Westerners did not see this rivalry coming. They don’t believe in what Mearsheimer calls the tragic nature of great-power politics.

Nor do they understand that the competition is a zero-sum game. Or that Australia is not going to be able to finesse its dilem­ma, effectively sit on the sidelines and enjoy the best of both worlds: unconstrained trade with China under the US security umbrella­. Vested business interests and a few academics continue to believe a new US-China trade deal or a rapprochement between Beijing and an incoming Biden administration will spare Canberra difficult choices. But they’re talking the language of a different era.

Today’s China, notwithstanding its own limitations and internal weaknesses, shows every sign of wanting to overthrow the US-led security system in the region. Xi’s repression is not winning Beijing respect abroad. Not since the 1960s have both sides of politics in Washington and Canberra been so united against the red menace.

And although Donald Trump has been chaotic and incompetent, American staying power in Asia is for real: the question is whether a US-led coalition pursues a ­strategy of containment, as Mearsheimer recommends, or one of “engaging and constraining” China, as former Department of Foreign Affairs and Trade head Peter Varghese suggests.

Tom Switzer is executive director of the Centre for Independent Studies and a presenter at the ABC.