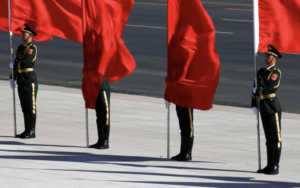 There is no shortage of analysis of what Australia did wrong to China to cause Beijing’s wrath, and no shortage of advice on how Canberra should set the relationship right. But underlying the criticism is a failure to recognise the nature of the China threat and the US resolve in meeting that threat.

The critics blame the Morrison and Turnbull governments for the decline in relations and assign virtually no agency to the Chinese government of President Xi Jinping. But it is Beijing that is bent on upsetting the regional status quo.

The truth is most great powers are ruthless beasts: they play hard ball at every turn; and the stronger China gets, the more it’s likely to throw its weight around.

It’s not just that China wants to challenge US military power in the region. Nor are Beijing’s goals confined to replacing the US as the leading economic power.

China has embraced “wolf warrior diplomacy,” where it uses its growing economic power to coerce or harm weaker states that implement policies not to Beijing’s liking.

In the past, China has annexed territory in the old, conventional, imperial sense – think of Tibet, Xinjiang, Inner Mongolia. And that is certainly what it has in mind for Taiwan, the Diaoyu/Senkaku Islands and most of the South China Sea.

But elsewhere, what it seeks is not territorial takeovers, but tributaries, in a new sense: the vision is that, thanks to China’s economic clout, other nations will consistently genuflect to it and not cross it. This vision has deep roots in China’s own history, summed up in two syllables – kowtow.

The critics say Australia must rebuild trust with Beijing without acquiescing to its demands. But how do our leaders restore a dialogue with a hyper-nationalist China that wants us to kowtow? Doesn’t that represent a serious threat to our sovereignty? Doesn’t Beijing’s long list of demands as a prerequisite to improving relations make it harder for Canberra to do more to reboot relations with Beijing?

Appeasement won’t solve this problem. Australia is overexposed to Chinese pressure and the Communist leadership knows this. So they are going to inflict pain on Australia whenever they can. Sadly, there is no simple solution beyond reducing our exposure to China.

Of course, one explanation for China’s aggressive conduct is that their leaders think they have the wind at their back while America is in permanent decline. And it is true the US is bitterly divided and frighteningly polarised whereas a hyper-nationalist China seems to grow more self-confident all the time.

But the US also remains militarily and technologically the world’s most powerful nation. It is now energy independent whereas China is heavily reliant on foreign fossil fuels. US demographic trends are far more bullish than China’s. America’s leading universities remain the world’s best while the dollar remains the word’s reserve currency.

Moreover, both Democratic and Republican party leaders fully recognise the seriousness of the China threat. The evidence is clear that, with its withdrawal from Afghanistan, the US is more focused on Asia and intent on coordinating the efforts of allies to push back against Beijing’s bullying.

Joe Biden, like his predecessor, supports tougher anti-China measures, including a trade- and a high-tech war, the development of closer relations with Taiwan and the repudiation of Beijing’s claim that most of the South China Sea is its maritime territory.

Biden has declared that “there’s going to be extreme competition” with China. Secretary of State Anthony Blinken has described China as “the biggest geopolitical test of the 21stcentury.”  Biden and Blinken sound a lot like Donald Trump and Mike Pompeo. But there is a crucial difference: the former are far more committed to work more closely with allies in checking Beijing’s regional ambitions.

Both sides of Congress see China as an existential threat. Earlier this year, the Senate called for Washington to treat Taiwan as “a vital national security interest” and to engage with the island democracy “on the same basis, and using the same nomenclature and protocol, as the United States Government engages with other foreign governments.” Last month, the Senate passed a US$250b bipartisan bill to counter China’s growing technological and economic prowess.

Then there is American public opinion, which like Australian public opinion has become decidedly hostile. According to a recent Pew Research Institute poll: “About nine-in-ten US adults see China’s power and influence as a threat – including 62 per cent who say it is a major threat.”

What the intensifying Sino-American competition means for Australia remains a subject for debate. However, by downplaying both the China threat and the US resolve to respond to that threat, the critics don’t help Canberra’s policy-making deliberations.