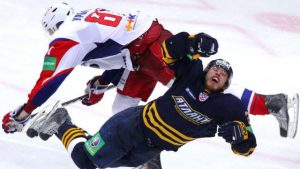 Trigger warning: This piece is littered with American and hockey references.

Back in high school, I played a bit of hockey (that’s ‘ice hockey’ to Australians). I wasn’t very good, so I typically resorted to being the teams… well, the team’s troll.

I would seek out the other team’s best player to get inside their head or heckle right into their goalie’s face until their team forcefully removed me.

Either way, I ensured the opposing tribe’s best player was distracted, drew penalties on opposing tribesmen protecting their goalie, and every now and then my stick would be in the right place to deflect the puck for a goal.

Which brings us neatly to political heckling on Twitter — which is like having two hockey tribes with a full roster of trolls. Everyone is out looking to draw penalties, getting in the faces of star pundits, even calling out news referees with their handles yelling; “Hey @media look at me!”

I knew that if you kept your stick on the ice in front of the net enough, you would eventually deflect the puck in for a goal. That looks to be the mantra of many Twitter dwellers — type out enough rants or sarcasm, and eventually, one in a million goes viral.

However, in the game of ice hockey, these episodes only lasted 60 minutes. A team would eventually win, then afterwards all shook hands. Somehow, after shaking hands, opponents turned back into friends and neighbours.

Imagine if there was no end and no handshake to those hockey games… Katy, bar the doors!

But this is Twitter: a never-ending game of hockey with teams of nothing but Hanson Brothers (I realise I’m pushing my luck with multiple American/hockey references). To make matters worse, our passion for Twitter is like that of Canadians for hockey.

Sadly, this game that started exciting, witty, and fun is beginning to drone on — and even beginning to be played off the ice.
WSJ and Quillette journalist Andy Ngo’s assault recently in Portland was a chilling reminder that this game on Twitter needs a serious intermission. Especially the tribalism that’s ensued as a result. Even with multiple videos of the assault that left Ngo with a brain hemorrhage, we have tribal referees of the news proclaiming the ends justify these means.

Real people are rallying around the idea that Ngo deserved this. Antifa and their sympathisers are agreeing that some people in our physical reality world deserve to be punched and physically harmed.

Whether it’s a self-imposed month or two break, or deleting Twitter or Facebook off your phone, or deleting your account altogether, we need an intermission to realise these personas and personalities on ice, are not the reality around us. We all need a good post-game handshake to realise we are all still the same people we were before Twitter.

But if you still insist on taking one for the team playing in the Twitter rink, remember: keep your stick on the ice!