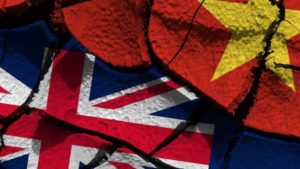 His demands were made in the context of the Party’s persecution of the Uyghur population in Xinjiang and its extra-territorial attempts to intimidate and silence Uyghurs living in Australia.

The trio — Wesa Chau (a deputy lord mayor candidate for Melbourne), Ormond Chiu (a research fellow at think tank Per Capita) and Yun Jiang (an ANU researcher and co-editor of China Neican) —  made it clear they did not endorse the Party or its actions and re-affirmed their support for universal human rights and democratic values.

But they rightly refused to be hectored into making blanket public condemnations, arguing that this amounted to an unfair “loyalty test” based on ethnicity.

The exchange has only served to highlight the undue pressures some Chinese-Australians face. These pressures cut both ways.

It is intolerable that some citizens cannot criticise the CCP without being stalked and harassed and/or fearing for family members back home. It is equally intolerable that others may feel they need to self-censor or stay silent to avoid being tarred as a CCP sympathiser.

And from a national security perspective — as Natasha Kassam and Darren Lim recently argued — such a line of questioning may make it harder for security agencies to investigate foreign interference, if it alienates rather than engages the very communities that are not only the most targeted by such interference but also the most important to countering it as a major source of knowledge, understanding and intelligence.

We must ensure that genuine concerns about CCP interference do not lead to over-reactions that undermine liberal values and community cohesion, undercutting ritual claims that Australia is one of the most successful multicultural countries in the world.