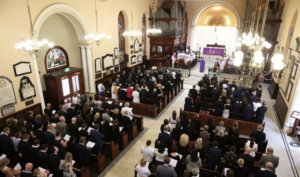 Cowed by public health reprimands and driven back into lockdown for fear of contagion, many Australians these days appear content to sacrifice liberty for the sake of safety. But the beacon of liberty continues to glow, and there are hopes it will yet burn brightly.

All but forgotten as COVID-19 overwhelmed the nation last year, the Morrison government’s commitment to protecting religious freedom—first promised in the 2019 election campaign in the wake of the campaign for same-sex marriage—has reawakened.

Attorney-General Michaelia Cash has announced that she will bring a revised version of the pandemic-postponed Religious Discrimination Bill to Parliament by the end of the year.

The new proposals are likely to prove just as controversial as those first put forward by Cash’s predecessor, Christian Porter. Critics of the bill will almost certainly argue that religious freedom protections amount to support for “hate” speech and prejudice.

Yet far from creating a licence to pursue the socially unacceptable, enactment of the legal protection of the fundamental right to religious liberty will strengthen the capacity of citizens of an already successful and diverse multicultural society to live together.

At present, our anti-discrimination laws generally provide only exemptions for faith-based organisations. The proposed Religious Discrimination Bill would bolster this by creating a specific right enabling those organisations to act in accordance with their religious tenets.

What is it that has brought this country to the point where legislation is needed to enforce the fundamental human right to religious liberty? One factor is the advancing reach of identity politics, which accentuates—rather than ameliorates—differences between people.

Accentuation of difference, in turn, makes it harder for citizens of a secular, multicultural society to dissent from the new orthodoxies about gender, human sexuality, and the family. Instead, dissent is weaponised and deployed as a form of alleged “harm” to shut down debate.

A law to protect the fundamental human right to religious liberty would not have been necessary for Australia had it not been for the intolerance shown by those determined to silence and shame religious believers who dared voice their beliefs in public.

For example, few would be surprised if an environmentalist group chose not to employ a confessing advocate of coal or other fossil fuels. Yet arms are thrown up in horror when a religious school asks its staff to be sympathetic to the creeds of the faith in question.

Indeed, any expression of sympathy for religious points of view on social issues can lead to condemnation and the call for boycotts—as happened in 2017 when Cooper’s Brewery sponsored an online debate with an advocate for and an opponent of same-sex marriage.

The legalisation of euthanasia poses the next set of problems for defenders of religious liberty. Faith-based health or aged care facility may find its freedom to refuse the administration of euthanasia on its premises removed by laws enshrining the so-called “right to die.”

This is already the case in Queensland, where a new Voluntary Assisted Dying (VAD) scheme affords no right to conscientious objection for faith-based providers. Patients who are hard to move or close to death will be able to demand VAD regardless of where they are located.

Australia long ago signalled a commitment to protecting religious liberty when it ratified the 1948 Universal Declaration of Human Rights and the 1966 International Covenant on Civil and Political Rights, two of the principal treaties setting out protections.

Ratification of such treaties does not automatically make the provisions part of Australian law and does not create legally enforceable rights. But it does entail a legal and moral obligation to act consistently with the treaties and to uphold their provisions.

Not that the right to religious freedom is absolute. It must always be balanced against the rights of other citizens. Nor can religious practice be justified simply because it is motivated by faith. Australian law, for example, prohibits female genital mutilation and child marriage.

No matter what proponents of such practices preach pieties, they will always be illegal, and those who practice them stand to be convicted. But this is quite distinct from preserving the freedom to order one’s life according to certain religious doctrines and beliefs.

The unrelenting onslaught of progressive secularism is also making it even harder for religious Australians to practice their faith openly and in public. As a result, we have come to a point where a Religious Discrimination Bill is not only to be welcomed; it has become essential.

The tyrants of tolerance have only themselves to blame for having so taunted their religious neighbours that the Morrison government, which came to office pledged to act, has now demonstrated a renewed determination to safeguard the liberties of all Australians.