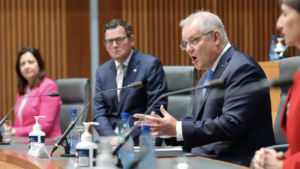 There is no justification for the uniquely high-level of secrecy the Australian government has maintained throughout the COVID-19 pandemic. A certain level of government secrecy is to be expected if you are dealing with national security or the military, but not during a public health emergency.

The response to coronavirus has impacted every aspect of our lives and liberties, and Australians have been compliant and rewarded our leaders with high approval ratings.

But, as the first interim report from the Senate select committee into the Australian Government’s handling of COVID-19 has found, Australians’ goodwill has been met with an alarming lack of transparency.

For example, out of the hundreds of meetings held by our key health body, the Australian Health Protection Principal Committee, statements relating to just 65 meetings were made public.

And, despite repeated requests from the Senate committee, the government has refused to release information; such as meeting minutes, and dates on when strategic decisions were taken.

The committee’s recommendation that all past and future minutes of AHPPC meetings be released is sound — and the minimum that should be required.

However, they should also justify why they decided to keep so much information hidden behind the ‘Top Secret’ stamp.

As one expert witness to the committee said: “In relation to public health measures, the default position should be that all of these conditions and deliberations are made public.”

This is the standard adopted in other parts of the world. New Zealand released the modelling used to make their decisions early in the pandemic, and the UK publishes minutes and supporting documentation for each meeting of its Scientific Advisory Group for Emergencies.

The concerning lack of government transparency was something highlighted in my analysis of Australia’s response to COVID-19.

Not only does the secrecy disrespect the ability of Australians to understand complicated information; it also limits the opportunities to canvas a range of solutions.

Australia took the unusual step of suspending parliament and limiting pandemic decision–making to a small group. This prevented our elected representatives from debating the strategy adopted to combat COVID-19. And keeping most of the health advice secret further hinders the ability to debate and scrutinise the government’s response.

But, unfortunately, since we first heard about COVID-19, debating the response to the virus has been discouraged.

Social media companies quickly appointed themselves the arbiters of scientific truth, with YouTube introducing a policy to ban any ‘misinformation’ about COVID-19. Although such a policy is superficially appealing, there are unintended consequences and overreach — as with all censorship.

Popular, mainstream British talkRADIO had their YouTube channel taken down earlier this week for violating the video platform’s COVID policy. The video in question was a debate between host Julia Hartley-Brewer and a former president of the National Education Union about school closures.

As is often the case after social media cancellations, their channel was reinstated after a backlash. But YouTube has also shut down accounts and taken down videos from prominent health experts such as Professor Karol Sikora, a former WHO adviser, and current Dean of the University of Buckingham’s medical school.

Many will support these moves and claim taking down ‘misinformation’ is necessary to save lives.

This is a furphy.

Firstly, no one should want a YouTube moderator to decide what is and is not scientific truth. Despite calls to follow ‘The Science’ of the pandemic, information is always changing. As the NSW health minister says in nearly every single press conference: we are learning more about this virus all the time and we will adapt our strategy as we receive new information.

This is the right attitude. To delete so–called misinformation because it does not conform to ‘The Science’ is shutting down scientific debate and preventing the exploration of ideas.

Secondly, like most big events, the pandemic is surrounded by no shortage of conspiracy theories. If information is taken down, or not released, people quite rightly ask why. And if the question is not satisfactorily answered, the silence can prompt opportunists to fill in the blanks.

Whatever your thoughts on how governments around the world have handled the pandemic, whether you believe lockdowns are appropriate, or that there has been government overreach, dissenting voices should be allowed to speak.

Questioning the policy of lockdowns or any other COVID suppression or elimination strategy is not a threat.

However, there is a threat in keeping information secret and branding anyone who questions ‘The Science’ of the pandemic a dangerous heretic.

We have sacrificed a lot in the name of COVID. Let us not give up on our open democracy and free inquiry as well.