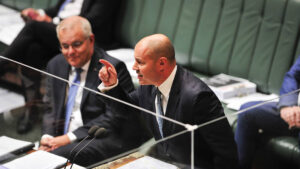 Australia is rapidly approaching a federal election campaign — and the potential battlegrounds are expanding by the day.

The government will no doubt seek to launch its re-election bid off the back of a friendly budget, by trying to plug weaknesses and shore up strengths with new spending programs and possibly further tax cuts.

It seems deeply unlikely that anything even remotely controversial will pass the treasurer’s lips on budget night. However pressing the economic case is for budget repair, the most pressing political concern is winning the election.

It is a fairly well-trodden path; and in light of the electoral failure of Bill Shorten’s broad ranging platform at the last election, probably a safer play too.

But just because it might be safer doesn’t mean that it’s better. In fact, the government could use the budget to launch an economic platform campaign focused on two key themes: accountability and productivity.

This means greater accountability and evaluation of existing government programs, and focusing future government spending on programs that can demonstrate effectiveness.

Specifically, the focus should be on getting more value for your money. Doing more with less, not — as government so often does — doing less with more.

This could represent a meaningful agenda for another Coalition term. Certainly there is little competition currently. However, the importance of this agenda is hardly unique to the Coalition. If anything, it will be more important for a potential Labor government.

If Labor does win the election, Albanese will immediately be under significant pressure from special interest groups and Labor backers seeking to expand government spending in a host of areas.

Public sector unions in particular will push hard for increased staff and pay levels. Not to mention the push for expanding the role of government in areas like childcare; despite the obvious problems in the existing early childhood education framework.

Labor has been particularly vulnerable to sweeping new spending campaigns that aren’t completely thought through.

For example, when last in office, Labor committed to a massive increase in school funding under the Gonski review. Yet, 10 years on from Gonski, we have little to show from our ‘investment’. In many areas, performance has declined — not only against international benchmarks but also against our pre-Gonski performance.

It turns out what you spend the money on really matters. As my colleague Glenn Fahey has noted, additional school funding actually makes little or no difference if you don’t change how the money is used.

Too much has been spent chasing policy goals with ambivalent supporting data — like cutting class sizes and expanding administrative staff — and not enough on evidence-based policy.

One of the biggest reasons for this is a complete lack of accountability for outcomes in education. In fact, many of those responsible for delivering outcomes are campaigning to remove the already small number of accountability and transparency measures like NAPLAN.

Another obvious area where good intentions have trumped evidence is in combatting Indigenous disadvantage.

In 2016, my then colleague Sara Hudson looking at over 1,000 programs aimed at alleviating Indigenous disadvantage and closing the gap. She found that just 8% had ever been evaluated and, of those handful of reviews undertaken, few “used methods that actually provided evidence of the program’s effectiveness”.

Again without serious analysis of how to make government spending more productive, there is little hope of improved outcomes.

Too many politicians who talk about the excesses of government spending are frightened off making serious inquiries into the effectiveness of programs in sensitive areas. After all, failed programs still attract stakeholders who protest loudly at disruption of their sinecures.

Even a supposed hardliner like Tony Abbott, on the brink of a massive election win, felt compelled to promise no cuts to health, education or pensions.

However, with expenditures in excess of $600 billion a year, why should we believe that key areas of Australian public life are drastically under-resourced?

On the contrary, in areas like health, education and welfare (approximately two-thirds of federal government spending) the commitment of taxpayer funds has been steadily growing over the last decade.

What is missing is evidence that this spending has delivered commensurate outcomes for ordinary Australians.

One of the more successful government initiatives in recent years in this area was implemented by the National Party in New Zealand. By focusing on holding government departments — and Ministers — accountable for outcomes, not just inputs, they improved government service delivery and undertook budget repair.

Moreover the National Party won elections while doing it, proving that such a message can be a political success.

The COVID crisis, with government’s unprecedented actions and, at times, questionable decision making, is the perfect case study for improving the process of government. There is no question that government could do better in many different areas.

While bodies like the Productivity Commission and the Auditor-General do a reasonably good job of identifying waste and suggesting reforms, there is not enough commitment on the political side to implement change.

Instead, politicians continue to approach government spending with the attitude that the most important factor is the size of the ‘investment’ in the press release announcing the program.

In fact, for many programs, this announcement represents the last time the political class pay any attention to the program at all.

Yet this should be the first step, not the last one. If a government is spending taxpayer money, it should be doing so with a specific policy goal and outcome in mind.

It’s not enough to be seen to be ‘doing something’. Spending that fails to achieve an outcome is worse than doing nothing. If only the electorate held our politicians to such a standard.