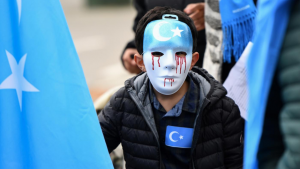 Recent  reporting of a 400-page leak from within the Chinese Communist Party — dubbed The Xinjiang Papers — confirms previous accounts of the Party’s political re-education campaign that has led to the mass detention of mainly Muslim Turkic minorities in the northwest region of Xinjiang.

The unprecedented leak came from a (presumably) high-level source who hoped that disclosure would “prevent party leaders, including Mr Xi, from escaping culpability.” Lower-level resistance to the crackdown is evidenced by revelations that 12,000 Party members in 2017 were investigated for “violations” in the “fight against separatism and extremism.”

The scale of the Xinjiang campaign is extraordinary — more than a million Uighurs, Kazakhs and Kyrgyz have been arbitrarily detained in prison-like camps — but so too is its self-defeating contradictions, as expert researcher Adrian Zenz argues.

Zenz likens the re-education drive, and the accompanying social re-engineering and intense surveillance, to a more sophisticated and high-tech version of the Cultural Revolution. He says the ultimate goal is not really to eradicate the “virus” of extremism and prevent terrorism, as the Papers indicate, but rather to achieve absolute ideological control — as elsewhere in China — by eradicating alternative belief systems.

Why? Because deeply-held beliefs are seen to compete with loyalty to the party-state. Yet attempts to stamp out religion lead to a spiritual void that Party propaganda struggles to fill.

Zenz notes that the spiritual revival China enjoyed after the Cultural Revolution has seen the number of Christians increase to some 100 million, a figure that exceeds total Party membership. This resurgence has defied materialist assumptions that economic development would lead to the decline of belief. Corruption has also undermined the Party’s legitimacy so that it is now “doubly on the ideological defensive”.

Beyond religion, the Party has tried to force unity in its borderlands by offering material incentives to sinicise minority identity through ‘ethno-linguistic assimilation’ while encouraging Han Chinese migration.

Australian expert in China’s ethnic governance, James Liebold, makes a similar point when he argues that Xinjiang typifies a situation whereby beneath a surface calm the mere perception of unrest “generates intensive surveillance and securitisation which in turn generates more instability”. A vicious cycle of “stability maintenance” results that increases mistrust, leading to social decay and eventually atrophy.