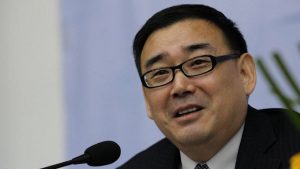 Australian writer and democracy campaigner Yang Hengjun has been formally arrested on espionage charges by Chinese authorities in Beijing after being detained for seven months without access to his family or lawyers of his choice. The charges carry the risk of the death penalty because they involve state security.

Foreign Minister Marise Payne has stated unequivocally that Dr Yang is not a spy for the Australian government, and has called on the People’s Republic of China (PRC) to treat Yang in accordance with international human rights law — including provisions against torture. She also expressed concern that the case is politically motivated.

Yang was detained without explanation in January on a visit to the PRC. At the time, ANU strategic analyst Rory Medcalf asked whether it was a case of ‘’hostage diplomacy” — or, more likely, that the Chinese Communist Party was waiting to punish Yang for his previous criticism of the one-party state and to thus send a chilling message to other dissenting voices.

Yang’s case is not an aberration, and his treatment once again exposes the lack of the rule of law in a country where the judiciary is not independent of the Chinese Communist Party.

Indeed, as CIS scholar-in-residence and human rights activist Anastasia Lin has argued, it is precisely this kind of case that has brought Hong Kongers out on to the streets in their millions to oppose the proposed extradition bill that would enable people to be transferred to mainland Chinese courts.

The Global Times newspaper, which is widely seen as the party’s mouthpiece, has warned that Australia should “respect China’s judicial sovereignty” and not interfere in the case. But respect is a two-way street and no Australian government can ignore the fate of one of its citizens.

As Liberal MP Andrew Hastie, who chairs the Parliamentary Joint Committee on Intelligence and Security, pointed out in an ABC Four Corners program on Chinese government interference in early April: