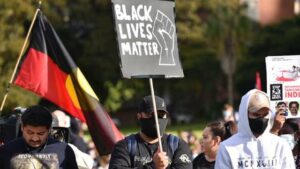 I once asked a Black Lives Matter member if these murders were of concern to the movement, but instead of an answer , the response was that I was ‘using the language of the oppressor’.

The 400-plus Aboriginal deaths in custody since the Royal Commission into Black Deaths in Custody report in 1991 has been a driving force behind the protests and has been reported widely by the media.

The fact is that, of these deaths, almost half in police custody were accidental, mostly as a result of  vehicle accident injuries, followed by natural causes and self-inflicted trauma.

If black lives really did matter, the movement would focus its efforts on tackling black on black crime and reducing the numbers of Aboriginal people dying outside of custody.

Let’s compare the national rates of death due to Indigenous on Indigenous violence in Australia between the years 1989–2012 as reported by the Australian Institute of Criminology.

During this 23-year span, there were 1,096 homicide incidents involving at least one Indigenous person. There were 951 Aboriginal victims of homicide, more than double the 437 deaths  that Black Lives Matter protestors are solely concerned with. Of the 951 Indigenous homicide victims, 765 were killed by an Indigenous offender.

It is not systemic racism that is killing black people in the United States or in Australia. In Australia and the US alike, the greater threat to a black person’s life is not a white police officer but another black person – and usually someone known to the victim.

Jacinta Nampijinpa Price is Director of the Indigenous Research Program at the Centre for Independent Studies, and an Alice Springs town councillor.