The third title in the Jameson Books-Students for Liberty Series, After the Welfare State: Politicians Stole Your Future … You Can Get It Back is a collection of essays by eminent political economists from around the world.

Young people today are being robbed. Of their rights. Of their freedom. Of their dignity. Of their futures. The culprits? The previous generation and its predecessors, who either created or failed to stop the world-straddling engine of theft, degradation, manipulation, and social control we call the welfare state.

The welfare state is responsible for two current crises: the financial crisis that has slowed down or even reversed growth and stalled economies around the world, and the debt crisis that is gripping Europe, the United States, and other countries. It has piled mountains of debt on the shoulders of the most vulnerable among us, children and young people, and has issued promises that are impossible to fulfil. The crisis of unfunded obligations is approaching. It won’t be pretty.

History, economics, sociology, political science, and mathematics are the tools to understand and evaluate welfare states, rather than emotional responses or conspiracy theories. This little book is for those who prefer to ask hard questions and to pursue them with open minds. It is time to ask the hard questions about what the welfare state has wrought, whether it is sustainable, and what should come after the welfare state.

— Tom G. Palmer, from the Introduction 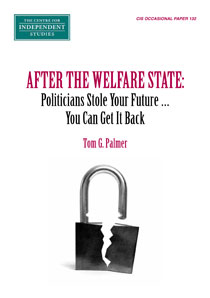