Social media appears in the news cycle, almost daily, and the majority of the coverage is negative. Politicians from all sides, and bureaucratic agencies have been warning about the apparent danger social media pose to journalism, democracy, business, and civil society. But Australians are far more optimistic about social media than the alarmist narrative.

The Centre for Independent Studies (CIS) commissioned YouGov to poll 1,024 Australians over the age of 18 to research those attitudes.  The results show Australians, regardless of age, value the ability to use social media to connect with friends and family, and believe it is more likely to connect people than isolate them from the real world.

Interestingly, more Australians thought social media had a negative rather than positive impact on society. However, those who used social media often, at least once a day, were the most positive about it, suggesting the more a user relies onit, the more positively they view its impact.

The most pertinent aspect of these findings, for politicians and policy makers, is that Australians are unlikely to support regulation if it limits the content they see on social platforms. Although there is a rush to regulate social platforms, it would be wise to consider a more classical liberal — non-interventionist approach — to ensure Australians are not disadvantaged by politicians eager to tame social media.

Social media has become an extremely complex policy and social issue. Accordingly, it is important to examine the impact it has on society and Australians’ attitudes towards it.

The polling was conducted online from the February 12–16, 2021; before Facebook blocked Australian news and the media bargaining code was passed. The results were weighted and are representative of the Australian public.

In addition to the usual demographic questions such as age, education level, income, sex, and state, the poll also asked about frequency of social media use; type of use; platforms visited [See Box 1], and voting intention. This extra demographic information allowed valuable analysis of how the social media type and frequency of use impacted attitudes.

The findings from the CIS poll are important for any future policy development. As the passing of the media bargaining code shows, the government is willing and able to regulate social platforms. There are also various proposals to extend the powers of certain bureaucratic bodies, such as the eSafety Commission. Policy proposals and interventions tend to only consider the negative impacts of social media; therefore overlooking the clear benefit Australians derive from its usage. Given the findings of the CIS polling, it would be prudent for governments – current and future – to stop adding additional laws to control social platforms.

In Australia, the policy question has not been whether social media should be regulated, but how. This poses unique challenges to those who prefer government to have a light touch, and who are naturally wary of government intervention.

Technological disruptions upon existing legal institutions, creating the possibility that a technological advance could both dramatically benefit some parties but dramatically disadvantage others in indirect and unpredictable ways. Where this is the case, technology has the potential to undermine both the moral foundations and the welfare justifications for classical liberalism.

There are five key conclusions to be drawn from polling conducted by CIS:

Social media poses unique challenges to society, and government. Remarkably, social media, over the past decade has seen a heroic rise and fall. In 2013, MIT Technology Review ran a cover page with the headline: “Big Data Will Save Politics” and the story positing “How Technology Has Restored the Soul of Politics.” The pieces were praising innovations in how political campaigns were using data to target voters. Less than a decade later, the same tactics have been demonised. As writer Fraser Myers outlines:

Today social platforms are blamed for a whole host of social and political ills. Everything from teenage angst to terrorism can apparently be blamed on social media. Political shocks around the world, including Brexit, Trump and the rise of populism, are blamed on the spread of fake news and misinformation via social-media platforms.

This summarises concisely the complicated nature of understanding social platforms and their impact. By the time there is a consensus on how to use social media, a new technology will emerge that will displace the old; and that too will come with its own benefits and drawbacks. This is especially why government should not continue to regulate social platforms — and serious consideration should be given to removing some of the laws already passed.

CIS polling indicates Australians greatly value the democratised nature of modern communication. Regulation of social platforms is not only premature, but risks disadvantaging Australians who clearly see a benefit from these technologies. Politicians should not be pollyannish about social platforms, but nor should they be catastrophists. 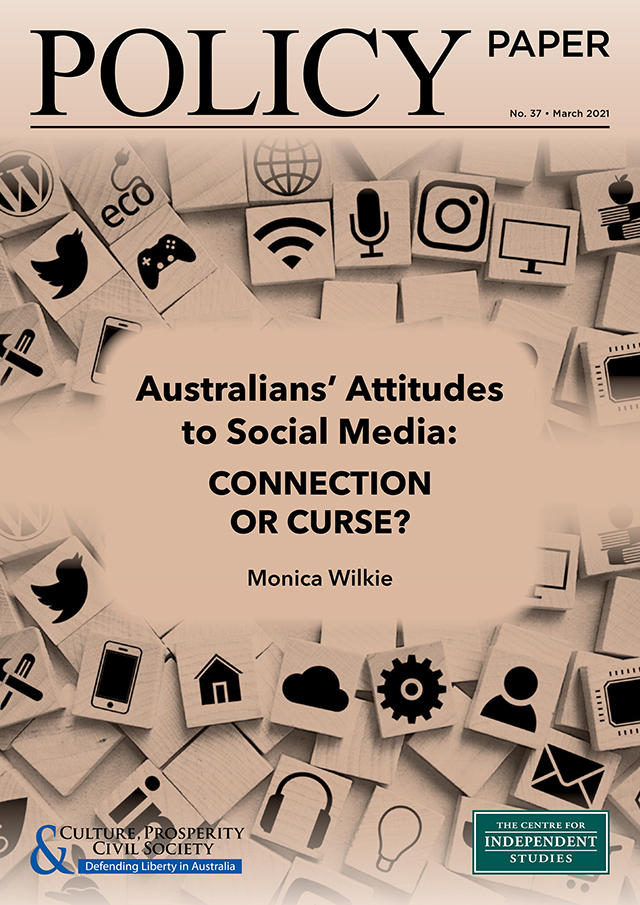