This paper argues that the now is the time to broaden and deepen the Australia-UK defence and security relationship as the post-Brexit UK tilts to the Indo Pacific. It outlines ways to collaborate on defence, intelligence and security and to tackle grey-zone interference, through both working together and with other like-minded partners.

China’s rise is perhaps the single most significant geopolitical question of the next decade – indeed, the next century. The sheer scale of its economy and military, combined with an increasingly authoritarian regime under Xi Jinping, means that the Indo-Pacific lies at the heart of the China challenge. Growing militarisation and Chinese aggression are destabilising the region, whilst Beijing’s willingness to use economic coercion in an attempt to bend governments to its will has highlighted the need for trade diversification.

On the economic front, the paper notes that the recently-agreed Australia-UK Free Trade Agreement should herald a new trend towards export diversification to counter China’s trade coercion. Both nations should also collaborate on setting international standards for emerging digital technologies that embed liberal norms, whilst working to deliver on the promises of the G7 B3W framework as a compelling alternative to the Belt and Road in the South Pacific.

Both the UK and Australia have suffered from a decline in relations with Beijing. But respective relations with China will always be dictated by a crucial difference: geographic proximity. Australia is far more exposed to changes in the stability of the security environment in the Indo-Pacific.

This is reflected in Australia’s 2020 Defence Strategic Update (DSU), which calls the deterioration of the Indo-Pacific strategic environment the “most consequential” since the Second World War and sets out plans to increase Australia’s spending on defence by 87% over the next decade. Although the DSU only mentions China by name in respect of the heightened power conflict between China and the US and China’s ‘assertive’ pursuit of greater influence in the Indo-Pacific, China is tacitly referred to in the acknowledgement of grey-zone activities, military modernisation (particularly in the South China Sea) and the international rules-based order as issues of contention.

The UK is less directly affected by a more unstable Indo-Pacific, making the Australia-UK defence and security relationship all the more important. But we are a maritime nation, and a nation with a services economy that prospers on the foundation of a rules-based international order. So it is appropriate that the March 2021 Integrated Review labels China “by far the most significant geopolitical factor in the world today, with major implications for British values and interests and for the structure and shape of the international order.”

As with Australia’s Defence Strategic Review, direct reference to China on specific issues are few and far between; the concept of civil-military fusion is framed in terms of ‘adversaries’ in general. The inclusion of an Indo-Pacific tilt, however, is an implicit acceptance of China’s influence. The challenge for the UK will be in turning a single voyage — that of HMS Queen Elizabeth and her carrier group this year — into a persistent presence.

As Beijing extends its reach, our commitment will be judged not by our best effort but our enduring capability. It is welcome that the UK has therefore pledged to increase defence spending to £51.7bn by 2024-25, although less welcome that the rise accompanied a cut in troop numbers because so much of it has gone into filling holes in the equipment budget.

Australia’s security in terms of economy, trade and industry are equally integral pieces of the broader national security picture. That same geographic proximity has seen Australia develop significant economic dependence on China. China is Australia’s largest trade partner, accounting for 29% of all trade and the destination for 39% of Australia’s goods exports in 2020. The UK’s economic relationship with China is less evolved (China is only the UK’s sixth biggest export market). But the UK’s trade relationship with China has deepened over the past decade, so we ought to pay attention to lessons from Australia about managing the risk of economic dependence and the threat of trade coercion.

Australian Bureau of Statistics, ‘Australia’s Trade in Goods with China in 2020’, https://www.abs.gov.au/articles/australias-trade-goods-china-2020 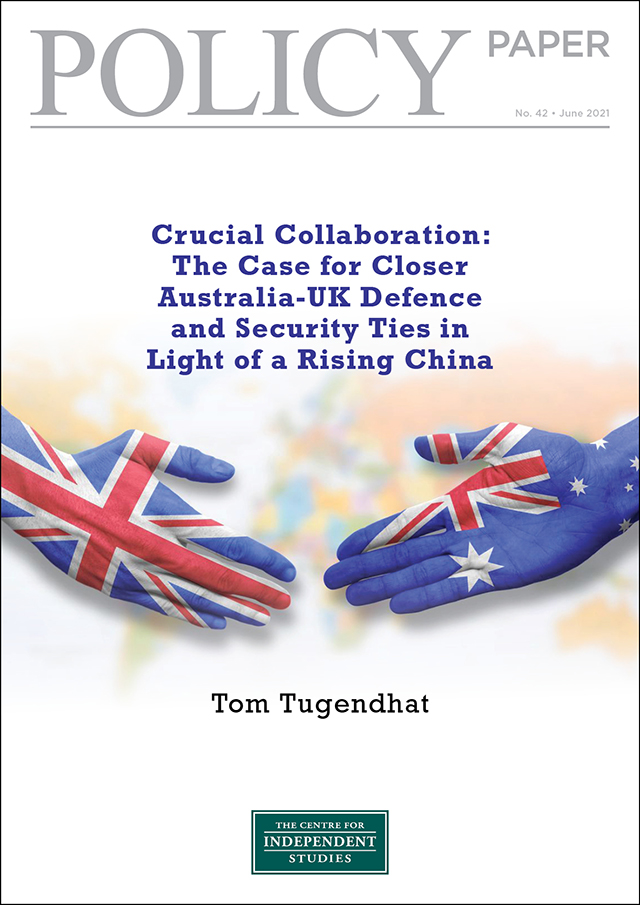