Local residents often oppose new high-rise development apartment buildings on the grounds that they would harm neighbourhood character. This paper suggests these concerns are overstated.

The paper examines several examples of high-rise development in Sydney: Chatswood, Forest Lodge, Green Square, Liverpool and Turrella. If these developments harmed neighbourhood character, as local residents often claim, nearby house prices should fall. But that does not happen. Instead, house prices in each suburb closely track the prices of houses in adjoining suburbs – both before and after the development.

This implies that high-rise development apartments have little effect on neighbourhood amenity.  A secondary implication is that houses in adjacent suburbs are very close substitutes. projects

Fears of many local residents that tall apartment buildings would harm neighbourhood character are overstated, according to new research from the Centre for Independent Studies.

The authors argue that, judging by willingness to pay, the relative amenity of living in Chatswood barely changed. The authors conduct similar analyses for other suburbs that have experienced high-rise development and find much the same result:  house prices near new apartment buildings move by about the same as house prices elsewhere.

According to the authors, these results do not mean that residents are necessarily wrong to oppose new developments – they are entitled to their preferences.  However, other potential residents have different preferences: they like the access to shops and transport that comes with high density.  Many potential residents want a walkable lively neighbourhood and will pay more for that.  Dr Tulip and Mr Lanigan suggest that these competing preferences appear to approximately cancel out. 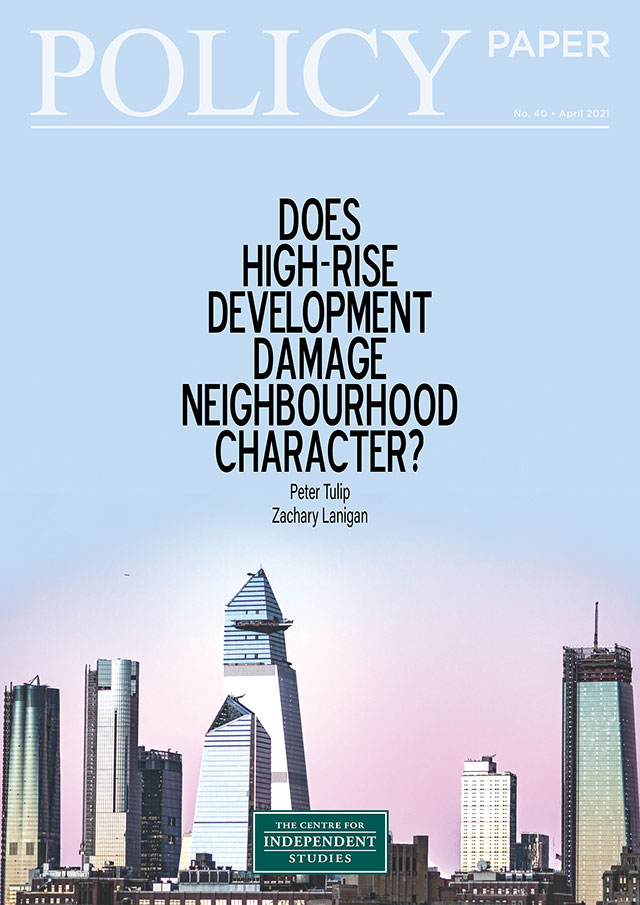