Australia needs to cut company tax to 25% to boost business investment, which is currently at recessionary levels. An investment boost will grow the economy, leading to increased wages, employment, national income, exports and productivity. Business investment is being hampered by our uncompetitive company tax, which is highly inefficient and much more burdensome than in other developed countries.

In the longer term, most of the benefits of the tax cut go to workers, not big business or foreigners. The short-term costs should be seen as government investment, just like investment in infrastructure or improved education, and the budget costs can be fully offset by other policy changes.

The estimated benefits are substantial, and may in fact be underestimated as the modelling assumes that Australian-financed investment won’t increase, when in fact this investment is likely to increase.

The benefits are likely to be greatest from cutting the tax rate for all business, not just for small business alone. 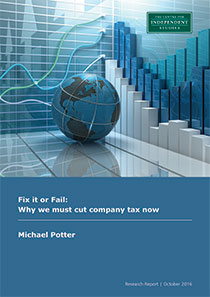