On June 15th, 2015 celebrations will be held around the world to mark the 800th anniversary of one of history’s most important documents. The Great Charter, witnessed and sealed in the meadows of Runnymede in 1215 by King John and his barons, offered a founding statement on the rights of the individual and is best known by its Latin name, Magna Carta, or, less commonly, Magna Carta Libertatum; the Great Charter of Liberties.

The Centre for Independent Studies is proud to be part of those celebrations and warmly invites you to join us for a special event with addresses by ABC Chairman, former Chief Justice and former Lieutenant Governor of NSW the Hon James Spigelman AC QC, and the Hon Christian Porter MP, Parliamentary Secretary to the Prime Minister and Member for Pearce, representing the Prime Minister on this occasion.

From a turbulent, bloody and double-crossed beginning to the most successful and influential system of liberty we have today, the Magna Carta represents the beginnings of modern liberal democracies and the rule of law. For those who refute its importance with the argument that it merely bolstered the rights of privileged barons against an unscrupulous and greedy monarch -with no thought for the rest of society- we offer a counter-argument from good CIS friend and Member of the European Parliament Dan Hannan MEP:

“ …It had nothing to say to or for the vast majority of Englishmen, let alone Englishwomen, who remained serfs and vassals. In a literal sense, all this is true; and yet our later freedoms were gestating in the Charter. Establish the rule of law – the idea that the authorities can’t make up the rules as they go along – and everything else will eventually follow: free contract, secure property, equality before courts, free elections, free speech, free association, free conscience and, in due course, religious pluralism, a universal franchise and equality between the sexes.”

We warmly invite you to join us as we celebrate this remarkable history and legacy of freedom with an evening of champagne, canapés and erudition. 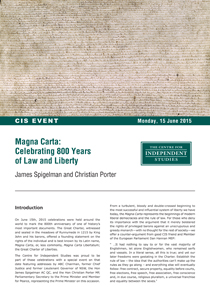