In this TARGET 30 Research Report CIS modelling shows that reforming the pension could deliver income gains of more than $5,900 a year to almost 98% of pensioners. These reforms would also reduce the cost of the pension by $14.5 billion a year.

“With four out of every five retirees on the pension, and pensioners with over a million dollars in assets getting the same payment as those with almost nothing, the pension clearly needs reform,” says Simon Cowan, research fellow and co-author of the report,The Age Old Problem of Old Age: Fixing the Pension.

“The way to boost pensioner living standards lies in unlocking the savings in the family home — not in continually increasing pension spending.

“As the population ages the pressure on the pension will only get worse,” Cowan says. “The answer is for government to count the family home in the assets test, boost take-up rates for reverse mortgages and including that income in the pension income test.

“Australians are continually told they don’t save enough for retirement, but there is $625 billion in pensioner housing assets that could be raising pensioner living standards. The potential benefits are enormous,” Cowan says.

Co-author, research fellow Matt Taylor agrees “Reverse mortgages let pensioners access the equity in their home, boosting their standard of living, but still allowing them to own their home and to stay there. By creating a government backed reverse mortgage annuity, lenders can offer lower rates and make higher payments to pensioners – who can borrow knowing that they can’t lose their home.”

“As wealthier pensioners access the equity in their home to boost living standards, government can afford to increase support for non-homeowners. Our reforms include an increase in the full rate of the pension for both couples and singles, as well as substantial increases in rent assistance,” Taylor says. 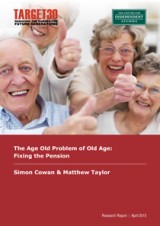