The 22nd Annual Johyn Bonython Lecture delivered by Johan Norberg
In this lecture, with optimism and humour, Johan Norberg looks forward to a future which can only improve with greater freedom, increased knowledge, wealth and technology on our side.

By any measure – health, wealth, happiness and the environment – we are the most enviable generation ever. Globalisation and capitalism have brought poor countries greater wealth than before, a fact that has been drowned out by the claims of anti-globalisation protestors.

Socialism and the claims of Marx, who argued that capitalism would make the rich richer, and the poorer, are proven wrong. The reality is that as the rich get richer, the poor get richer even faster. 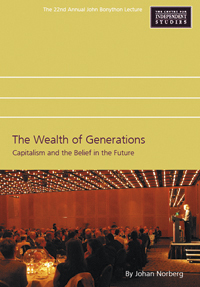