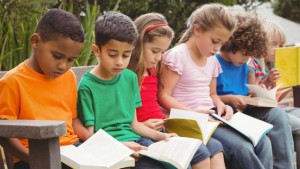 One million Australian children are at risk of reading failure, with serious negative consequences for their quality of life and for the progress of Australian society. In a developed country with record levels of education spending, there is no good reason for low literacy on this scale.

The figure of one million students— based on the results of national and international literacy tests — is five times higher than the number of children reading scientists estimate to have serious learning difficulties that cause children to struggle with reading.

Children from disadvantaged backgrounds are five times more likely to have low literacy at school than their more advantaged peers, perpetuating a cycle of low educational attainment and poverty. One in three disadvantaged children arrive at school with very poor language skills, and the gap between the language-rich and the language-poor grows over time.

Despite there being various causes of social, economic and educational disadvantage, there is only one domain in which a school system can have a significant and sustained impact — by harnessing the power of improved instruction, especially in literacy in the early years of school.

Major reviews of research on reading in the United States, Australia and United Kingdom not only agree on the key components of reading programs but also the most effective way of teaching them.

These reviews found there are five essential and interdependent components of effective, evidence-based reading instruction in school— the five ‘keys’ to reading. They are phonemic awareness, phonics, fluency, vocabulary and comprehension.

There is also mounting evidence that explicit, systematic instruction is the most effective teaching method, especially for the fundamental code-based components­ ― phonemic awareness and phonics — and especially for children at-risk of reading failure. According to eminent reading researcher and cognitive scientist Professor Keith Stanovich: “That direct instruction in alphabetic coding facilitates early reading acquisition is one of the most well established conclusions in all of behavioural science.” In recent years, research has continued to demonstrate that explicit teaching of the five keys to reading benefits all children and can significantly reduce literacy gaps.

The impact of reducing the number of struggling students through more effective initial class teaching should not be underestimated. School resources and teacher time can be deployed more effectively, learning support can be targeted to children with serious learning problems, and benefits for students extend from improved educational achievement through to a lower likelihood of the mental health and behavioural problems that frequently arise following reading difficulties.

Progress in knowledge of teaching and reading is dependent on evidence from studies that conform to the rigors of research in other disciplines where the human and economic costs of failure are high. Scientific research, especially from the field of cognitive science, has provided an extensive and rigorous body of evidence about how children learn to read and the most effective ways to teach them.

A group of Australian reading specialists has twice drawn the country’s attention to this research in open letters published in The Australian—once in 2004, which led to the 2005 National Inquiry into Teaching Literacy (NITL), and again in 2012, when the recommendations of the inquiry had not been implemented. More than 10 years after the NITL report, this research is slowly beginning to be acknowledged in government policy. The revised Australian Curriculum has a stronger emphasis on phonemic awareness and phonics and the NSW government announced last week that teacher education courses that do not include evidence-based approaches to literacy, including explicit and systematic phonics instruction, will not be accredited.

But there is still a long way to go. To achieve the goal of effective, evidence-based reading instruction in every classroom, every day, there will need to be a concerted effort from principals, teachers, parents and policy-makers.

This decade could be the beginning of one of the most exciting periods in education history, as the sleeping giant of educational knowledge — ignored for so long — begins to influence education systems around the world. If the evidence on teaching reading is adopted and implemented, there should be no more casualties in the ‘reading wars’.

Read About It: The scientific evidence for effective reading instruction by Kerry Hempenstall (edited by CIS Research Fellow Dr Jennifer Buckingham) will be released at the launch of the FIVE from FIVE reading project on Tuesday, 8 March at NSW Parliament House. The FIVE from FIVE project aims to bridge the gap between research and practice in effective reading instruction.