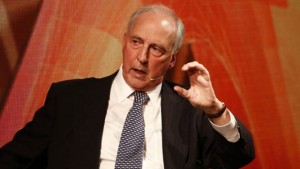 Opponents of company tax cuts seem to conveniently forget the widespread historical support for precisely the same policy. Now we have former Prime Minister Paul Keating scorning the tax cut in his usual emotive language. However, Mr Keating’s previous actions show he is dissembling in this opposition.

If tax cuts are so bad, then why did he promote and implement a previous round of corporate tax cuts? The company tax rate fell under his watch from 49 per cent to 39 per cent in 1988, and again to 33 per cent in 1993. All the arguments he used against a tax cut today equally applied to the Keating tax cuts.

And the arguments supporting previous tax cuts equally apply in the 1980s, 1990s and today. Most importantly, reducing the corporate tax rate, the tax on investment, will grow the economy and household wellbeing. The smokescreen arguments used by Mr Keating and others divert debate away from this central point. The OECD argues company tax harms the economy more than any other type of major tax; and Australian modelling by Treasury and others finds precisely the same result.

The opponents of the tax cut haven’t been able to rebut this central case in favour of the policy, despite all their favourite furphies. The tax cut will provide a large economic benefit far outweighing the budget cost. The benefit to GDP is at least 1 per cent based on Treasury estimates, after the budget cost is included, with substantial boosts to wages also forecast.

If we look at the benefit to national income and evaluate the policy similar to a business investment, the tax cut will provide an estimated rate of return of about 15 per cent, a return well above many other investments that could be made by the government – or even private business.

So the tax cut debate has been provided with evidence showing large benefits to GDP and national income. This should be a clincher, but instead we have the spurious arguments promulgated by Mr Keating and his fellow travellers.

And even these contrary arguments don’t stand up to scrutiny.

Mr Keating tells us the imputation system negates the effect of the tax cut on Australian investors. But as Mr Keating should know, this argument only applies to distributed profits. It doesn’t apply to undistributed profits – and businesses often retain profits for many years, with the average retention rate about 40-50 per cent. A company tax cut will affect these retained profits – and will encourage investment financed from retained earnings. Regardless, the policy will boost foreign investment which is an essential driver of Australia’s ongoing prosperity.

Imputation also isn’t an “elephant in the room” as Mr Keating argues. It is acknowledged by nearly everyone involved in the Australian company tax debate. Yes, our imputation system is unusual, but it is nevertheless similar to the dividend tax relief existing in many other countries. So if Mr Keating were right that imputation obliterates the argument for tax cuts, we would see analogous arguments stopping overseas tax reductions.

Yet the evidence shows the exact opposite. Almost every other developed country has cut their corporate tax rate since 2001, while Australia’s rate for larger business remains stubbornly unchanged. Other countries have rightly rejected the argument that dividend tax relief stops the case for corporate tax cuts, and so should Australia.

These international comparisons show the predicament Australia faces. The US is likely to reduce its corporate tax rate in coming years, as is France. These are the few remaining holdouts with a high company tax rate. If the US rate falls to 20 per cent, the weighted average tax rate across the developed world will become about 20 per cent, or 22 per cent if the US implements a cut to 25 per cent. Either way, we will become particularly uncompetitive for the international investment dollar.

And, contrary to Mr Keating’s arguments, this is a serious problem. As he notes, foreign investors were throwing money at the mining sector during the boom, even with our high corporate tax rate. But they aren’t now. Australia is facing a major investment drought, with new business investment at or near record lows as a share of the economy. Investment is worse than it was during the 1970s and 1980s recessions – and is only just above the levels during the 1990s recession, which Mr Keating should remember well.

It is bizarre to argue that we don’t have an investment problem now, just because we didn’t have a problem in the recent past. We are no longer in a boom, and the policy settings from the boom time just won’t work. Australia’s rating as a preferred investment destination is being lost before our eyes.

So instead of being distracted by the smokescreens we should be focused on the most important point: company tax cuts are vital to boost Australia’s investment, growth and wages performance.

Michael Potter is an economist and public policy commentator and authored the papers Fix it or Fail: why we must cut company tax now and The looming crisis in business investment for The Centre for Independent Studies.