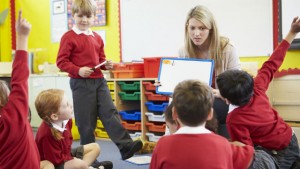 Analysing the latest NAPLAN test can be an exercise in frustration. No jurisdiction improved its mean score in any assessment domain from 2016 to 2017. The only break in the statistical monotony was a drop in Year 3 writing scores in South Australia.

Extending the comparison back further gives more reason for hope.

There have been big gains in Years 3 and 5 reading and in Year 5 numeracy in several states and territories since the tests began in 2008, but progress is patchy in other areas, especially writing.

The states and territories that have made the most important gains since 2008 are Queensland, Western Australia and the Northern Territory. While it is difficult to pinpoint why, it is reasonable to assume sustained incremental improvements are because of better teaching. There are sizeable pockets of schools in each of these jurisdictions that have embraced explicit instruction, especially in phonics, and have seen their ­NAPLAN scores rise as a result.

The NT Year 3 reading results are especially pleasing. There was a non-statistically significant dip this year, but this was after an upward trajectory in previous years.

Secondary school is a different story. It is a struggle to find any improvement in any area in Years 7 and 9 in any state or territory over the lifetime of NAPLAN.

To some extent this is to be expected: achievement in literacy and numeracy in high school is highly dependent on foundations laid in primary school. Hopefully, improvements in primary will soon flow through, but these gains will be lost if students do not continue to get high-quality teaching.

This year’s NAPLAN data show there is no straightforward relationship between school funding and students’ achievement. There have been substantial funding increases to all states and territories since NAPLAN began, particularly since the “Gonski” funding model began three years ago, but only some states have improved, and only in some areas.

The evidence that extra money has contributed to higher achievement is far from clear. It is well-­established that teaching is the greatest in-school influence on student achievement.

Once high-quality teaching has been established, good teaching costs no more than poor teaching. This is partly why it is difficult to find a consistent causal association between the size of the education budget and results.

Improving results requires schools to use evidence from the best multidisciplinary research on how children learn and the most effective way to teach them. If increased spending is not invested in making sure all teachers have this knowledge and expertise, then it is destined to be wasted.

Jennifer Buckingham is a senior research fellow and director of the FIVE from FIVE project at The Centre for Independent Studies.