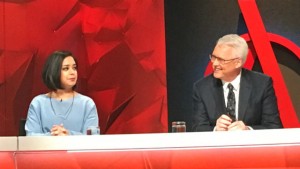 Spring returned to Sydney for the long weekend, just in time for me to spend three days incarcerated indoors packing for a house move — and topping that entertainment off with an appearance on ABC’s Q&A.

The show’s cautious producers had put me on standby alert the previous week, in case their overseas talent couldn’t make it. I texted the CIS comms (benevolent) dictator, saying “Don’t get excited, but I might be on Q&A next Monday.” But true to form, her response was “Too late…I’m already excited.” That made one of us.

For a centre-right think-tanker, the opportunity is tremendous. But it’s not a cost-free exercise — you get the distinct feeling you are but a dancing monkey.

The pollies — bless ‘em — have no choice. But I can imagine them receiving specific media training about how to trudge the gauntlet of Q&A. Certainly, Social Services Minister Christian Porter and Opposition climate spokesman Mark Butler remained unruffled. We plebs — in this case myself, Marina Go from Bauer Media, and ubiquitous social commentator Eva Cox — must rely solely on whatever wit and charm we can muster on a long weekend Monday night.

Christian Porter is one of the few on the government’s front line in possession of a gift for both policy detail and the common touch. So in spite of many viewers having already made up their minds that he’s an evil fascist who hates the poor, Porter took full advantage of the program’s format to detail the government’s Priority Investment Approach to welfare.

All but the most hardened of partisans would have to say he won the debate with naysayer-in-chief Eva Cox — who declared in the Green Room she had come armed with an arsenal of statistics and figures to throw at him, but only managed vague pronouncements about ‘fairness’, in true Dennis Denuto fashion.

A somewhat time-warping addition to the cavalcade was the question from a teenage girl on body image and the magazine industry. This took me back to my own tenure as a pre-teen and adolescent: health classes focused on the importance of a ‘healthy self-image’ but also retaining a ‘healthy lifestyle’ through diet and exercise. But with magazine sales plummeting, perhaps pornography has stepped in to quartermaster the resultant drought of unrealistic expectations for young women’s bodies. Everything old is new again.

Go’s answer included (perhaps a final plug before announcing a few days later she was leaving Bauer) her urging everybody to buy the latest issue of Cosmo — with Tony Jones’ response “I so wish you hadn’t said that” a quick bandaid for the question of advertising on the ABC.

After sitting through the first Presidential debate and the subsequent wittering, it’s become clear there are very few people worth listening to when it comes to this year’s US election. Wednesday proved one of those few is Tom Switzer; the former editor of this august publication and a senior fellow at the US Studies Centre at the University of Sydney.

It’s clear how desperately everyone is scrambling to explain the Trump phenomenon, and not many have had the courage to admit they’ve been blindsided. The pollsters, pundits, insiders and experts have egg on their faces. Switzer said they’ve all ‘misunderestimated’ Trump, and was forthright in including himself in that group.

Some of the superficial reasons for Trump’s success are easily identifiable: he presents himself as an anti-politics candidate, an outsider who deplores the tactics used by an establishment that the public has largely lost faith in. Trump’s supporters either don’t know or don’t care that — as Switzer pointed out — he is part of the same business cabal with such close links to the establishment, which has driven this loss of faith.

Which gets at the heart of Switzer’s point: Trumpism, driven by a perception among ordinary Americans that their country is in a bad way — in decline after the forces of globalisation have gutted the lower-middle class, and at war for 22 of the 25 years since the collapse of the USSR, with nothing to show for it — will outlast Trump if he loses. And if he wins, his policies on trade would, if enacted in full, create chaos by driving a trade war. With profound consequences for Australia.

Which, incidentally, is not so far removed from the view of the Secretary of the Department of Prime Minister and Cabinet, Martin Parkinson — though he scrupulously avoided addressing the issue head-on in a speech to the Lowy Institute on Thursday.

Those of us firmly committed to economic liberalism, Parkinson included, have watched with dismay as public opinion has shifted definitively against free trade, foreign investment and immigration. And the strength of certain political figures across the Western world has begun to reflect this.

Parkinson’s solution is to achieve socially-just outcomes through redistribution of the proceeds of growth within the framework of a progressive tax-transfer system — rather than to double down on economically-damaging solutions like foreign investment and trade restrictions which would increase prices for consumers and reduce living standards.

For those of us who would like to see less tax and less transfer, this may be the only politically saleable compromise. The head of the public service certainly thinks so — though, it must be said, he was also strongly critical of redistribution to the middle class.

So much to put a frown on a classical liberal’s face. All this in a week where the Parliament wasn’t even sitting.