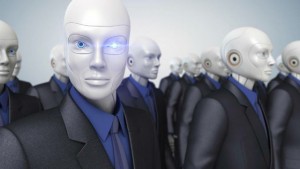 This is a question on many people’s minds, and it’s fuelling fears that advances in automation and artificial intelligence will lead to widespread unemployment, if not a jobless future.

The cheeky new website willrobotstakemyjob.com attempts to answer this question –by using machine learning to tell you whether machines will replace you.

Based on data gathered from a widely-cited 2013 Oxford University study that estimated around 47% of jobs in the United States are at risk of automation, the online tool allows you to search for your job and find out how likely it is that it will be automated or computerised in the near future.

I typed in ‘editor’ and it calculated a 5.55% probability. So I’m safe from robots (although not from other humans). For ‘proofreader’, however, the risk of automation shoots up to 84%.

This simple exercise suggests that if you look at specific tasks at risk of automation, there are grounds for pessimism. But if you look at the broader context, there is room for optimism. If mundane rote tasks like proofreading can be automated, for instance, it should free up editors to do more creative and intellectually satisfying work.

The potential for new technologies to complement how we work is one of the points David Gruen makes in a forthcoming Policy journal article on the labour market implications of technological change.

He argues that what machines take away in jobs they tend to give back in the form of new complex tasks that in turn create new jobs.

Where the case for pessimism is stronger is in wages rather than employment per se. Gruen notes that the current wave of technological innovation has led to a fall in income accruing to labour as opposed to capital. This trend may continue for some time.

Indeed, a recent study found that living standards failed to rise until decades after the original Industrial Revolution began. But it also pointed out that one important difference between then and now is that public policy can be used to ameliorate the harsher effects of job displacement and economic dislocation.

As Gruen warns, ‘Recent political events across the developed world reinforce the importance of this endeavour.’