China’s unprecedented trade campaign against Australia is a case study in economic coercion for geopolitical purposes. Its aim is twofold: to bend Canberra to Beijing’s will and to decouple it from the US alliance system. Australia has withstood such pressure to date, but needs American support.

This paper argues that the Biden Administration should lead in helping Australia and other targeted countries to defend themselves against China’s coercive practices. The aim should be to build the broadest possible coalition of the willing through a multi-pronged strategy that plays to America’s strengths by building a united front of democracies; recalibrating US diplomacy with like-minded countries; supporting agile multilateralism; and prioritising neglected ties with Southeast Asia.

Countering China’s trade coercion is a necessary defensive measure to protect the prosperity and security of every nation that values its sovereignty and an open trading system. Capitulation would embed the use of coercion in a new, China-dominated authoritarian world order in which smaller states risk being reduced to vassals. Conversely, US support for Australia would send a powerful signal to friends and competitors alike that the Biden Administration is prepared to resume a global leadership role after Donald Trump’s America First approach.

President Joe Biden has made it abundantly clear that the cornerstone of his foreign and trade policies will be working with friends and allies to restore American leadership and advance the cause of democracy in a more contested world. But in the face of China’s epochal challenge, neither goal will be achieved unless the Biden administration demonstrates tangible support for hard-pressed democratic allies like Australia. The ‘Land Down Under’ has been on the receiving end of an unprecedented campaign of intimidation and coercion from Beijing, clearly designed to bend Australia to China’s will and decouple it from an alliance system that has underpinned and sustained American power for 75 years.

Senior administration figures have publicly declared their support for Australia, telling their Chinese counterparts that relations won’t improve until they cease their “blatant economic coercion of Australia” and “a more normal interplay between Canberra and Beijing is established.” But they have yet to spell out how they intend to address the issue. Unless Washington imposes costs on nations that use coercion, China has little incentive to stop using a tactic that has been successful in forcing smaller countries to submit to its demands.

Under President Xi Jinping, economic statecraft has become an integral part of a distinctive approach to foreign and trade policy in which coercion is used for geopolitical purposes to cement China’s place as a leading global power. Beijing also uses inducements — in the form of investment, trade and development assistance — to reward countries. When skilfully orchestrated, these inducements encourage compliance and the formation of pro-China constituencies within targeted countries, making it more difficult for their governments to resist Beijing’s demands. Although important, this paper examines the lesser-known coercive dimension of China’s trade and foreign policies — using Australia as a case study — and proposes a countervailing strategy.

The use of coercion to achieve geopolitical ends is not new or confined to China. In an insightful analysis of Albert Hirschman’s largely forgotten 1945 book, National Power and the Structure of Foreign Trade, economist Robert Atkinson details how autocratic German regimes weaponised trade policy in the first half of the 20th century to achieve global power. Pre-World War 2 Germany was a “power trader”, manipulating trade for military and commercial advantage. But Xi has refined, and modernised, the use of coercive tools to threaten the independence and sovereignty of other states and undermine the foundational principles of the international trading system.

Over the past decade, there have been 152 recorded cases of Chinese economic and diplomatic coercion affecting 27 countries. They include de-facto trade sanctions, boycotts and investment restrictions that transgress established norms and exploit weaknesses in World Trade Organisation rules. The most common non-economic measures are arbitrary detention, restrictions on official travel and state-issued threats.

Atkinson, Robert D. “A Remarkable Resemblance: Germany from 1900 to 1945 and China today. Time for a NATO for trade?” The International Economy, Fall 2020. 2020-Fall-TIE-Remarkable-Resemblance.pdf (itif.org) 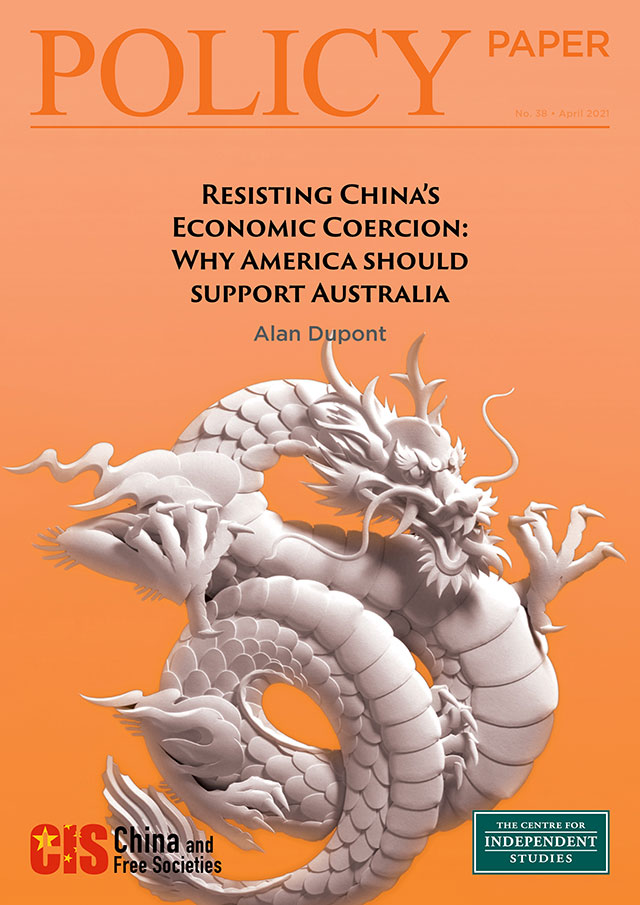