This paper goes beyond economic and other explanations for the resurgence of populism to provide a much fuller psychological account — indeed, a warning — of how populism appeals to our age-old tribal instincts formed in the ancient past when group cohesion was the key to evolutionary success. What is necessary for populism to flourish is a persuasive psychological narrative that mobilises these deep-seated psychological characteristics and turns them into a potent political force.

The paper explores how populist movements cater to the evolutionary propensity of people to seek positive group identity, moral absolutism, simplicity and epistemic certainty. The strategies employed by populist narratives and leaders to satisfy the psychological expectations of their followers is then discussed. It concludes by arguing that a better understanding of the psychological mechanisms that populist movements exploit is therefore essential if the threat to liberal democracy is to be contained.

The Psychology of Populism: Foreword

Coarsened political discourse has become a dismal, if familiar, feature of many democratic societies in recent years. Critics usually cite former US President Donald Trump as the worst example, but this is to confuse coarseness with vulgarity. Behaviour is only part of the problem.

It extends to the reduced esteem in which the institutions of political life are held. A growing indifference to the distinction between truth and falsehood, for example, and the readiness with which political leaders abandon previously declared obligations — should they prove inconvenient or burdensome — are also important features. They combine to contribute to a diminished political and social culture in which appeal is frequently made to that portion of the population considered invisible and which feels ignored by so-called ‘elites’.

This style of politics is the essence of populism; a phenomenon that has been resurgent in many Western democracies. It has displaced the oppositional style of politics, traditionally characterised by left-wing and right-wing positions, with a conflictual style that contrasts the virtuous with the villainous. The demarcation is often presented as an absolute one that denies any possibility for compromise or reasoned engagement: those whom the populist leader attracts as followers are always in the right; those who are denounced by the leader are beyond redemption.

But there is more to populism than politics. While it may find political expression as promises to secure correction of injustice or equitable distribution of resources and opportunity, Professor Joseph Forgas argues that a full explanation of populism’s appeal must take into account human psychology and the evolutionary roots of humankind.

As tribal creatures, human beings derive feelings of comfort and security from membership of the group. Exclusion from that group is painful and disorientating; and the threat of such exclusion always serves as an effective form of sanction. We need to belong, and to know that we belong. Is it any wonder that the politics of identity retains its powerful attraction for so many? Forgas argues that any account of populism that ignores the complexities of human psychology will be partial, at best.

He is very clear that our yearning for a sense of collective identity is deeply rooted in our psychology. But if that’s the case, what are we to make of the Enlightenment and its commitments to liberty, tolerance and individual autonomy?

Forgas sounds a stern warning that if we are serious about preserving the legacy of the Enlightenment, we must not take it for granted. He even entertains the sobering possibility that, far from being an era that established immutable truths about the human condition, conferring singular significance upon the individual, the Enlightenment might be understood more appropriately as a brief and interesting interruption in our post-Paleolithic development.

He leaves us in no doubt that he thinks populism poses a serious threat to liberal democracy — a threat that we must take seriously. Rather than simply throwing his hands up in despair,  he urges us not simply to react in political terms to what is going on around us but to understand why and how populism retains such significant appeal.

The Culture, Prosperity & Civil Society program at the Centre for Independent Studies (CIS) has been concerned with the impact of populism, particularly as it is manifested in the cultural forms of cancel culture and identity politics. The assertion of group primacy at the expense of the individual, coupled with mounting intolerance of any expression of dissent, threatens the very principles of a secular liberal democracy to which CIS remains committed to defend.

In this important essay, Forgas reminds us that steadfast defence is of the highest importance and that what we value must never be taken for granted. No matter what we assume about the inevitability of human progress, our psychological make-up bears a Paleolithic imprint that may yet override our Enlightened sensibilities.

Fukuyama, F. (2018). Identity: The demand for dignity and the politics of resentment. New York: Farrar, Straus and Giroux. 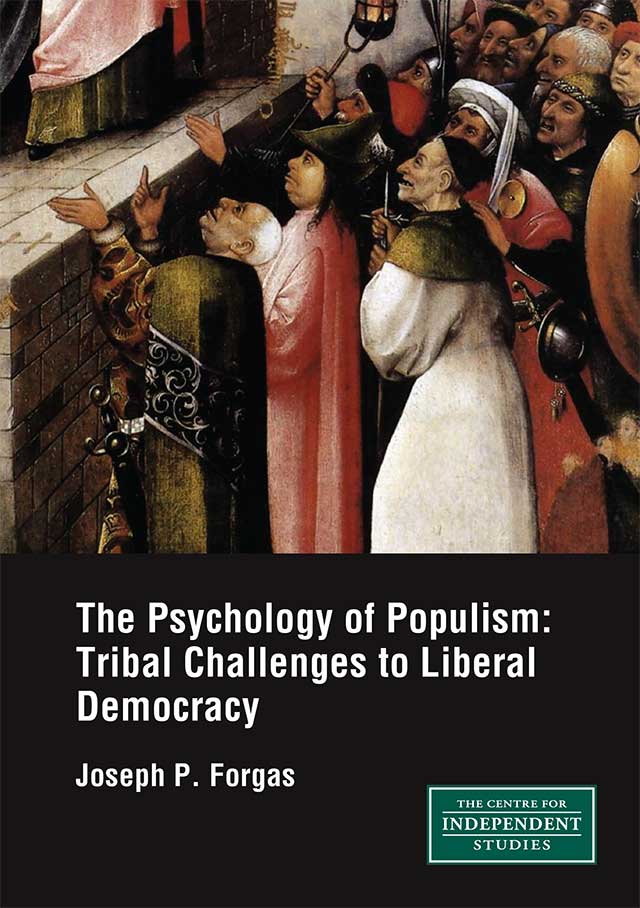