This paper assesses different ways in which Canberra can work with Washington in countering China as part of a broader coalition of like-minded nations rightly concerned about what a future of economic coercion, maritime border disputes, and contested resource rights and shipping lanes may hold.

China’s recent actions – its trade coercion against Australia, border clash with India, maritime harassment of Japan, and military expansionism in the South China Sea – have compelled the U.S. and Australia to leverage their decades-long defence alliance and intelligence ties to deepen existing relationships and build new partnerships in the face of an aggressive China bent on asserting itself across the Indo-Pacific.

While Japan and India have moved closer to the U.S. and Australia – most recently through the reborn Quad – other potential regional partners such as Vietnam, Indonesia and Singapore are either hedging or approaching the changing security dynamics in a more deliberate fashion. There are opportunities to enhance cooperation with these nations in countering China, but progress will likely be incremental.

Neither the U.S. nor Australia can allow themselves or their partners to become supplicants of Beijing, and greater bilateral coordination in conjunction with a broader approach in the region will be essential to countering China’s aggression and securing the future of a free and open Indo-Pacific.

Author Erik M. Jacobs says the U.S. and Australia must leverage their strong relationship to deepen existing partnerships, build nascent strategic ties, and find new ways to cooperate in the face of an aggressive China bent on exerting itself across the Indo-Pacific region.

“The long-term importance of these relationships is apparent in strategic outlooks coming out of both Washington and Canberra.  “The existing U.S.-Australia Alliance should be a key pillar underpinning an Indo-Pacific region free from coercion and open to unhindered navigation and overflight, with the reborn Quadrilateral Strategic Dialogue (Quad) serving as another pillar.

Jacobs highlights that Prime Minister Scott Morrison heralded the Quad leaders’ summit as a “new dawn” in the region. “It is now incumbent upon Australia and the U.S. to expand partnerships to make this happen, starting with Japan,” he says.

“There are opportunities for the U.S. and Australia to enhance cooperation with other potential regional partners in countering China — Singapore, Vietnam and Indonesia — that are either hedging or approaching the changing Indo-Pacific security dynamics in a more deliberative fashion,” Jacobs says. “However, progress will likely be incremental; with Japan playing a potentially prominent role. For instance:

Jacobs says future cooperation between the U.S., Australia and other nations on pressing issues — such as supply chain integrity, advanced and emerging technologies, critical minerals, and vaccines — present additional opportunities to build new relationships with other countries across the Indo-Pacific as they reconsider the national security risks of reliance on China.

“Increased Australian energy exports to Japan also present an opportunity for trade diversification and growth in the face of Beijing’s campaign of economic coercion,” he says. “However, as the Biden administration is unlikely to rejoin the revamped Trans Pacific Partnership, Australia and other regional governments should deepen economic ties.”

Xi Dreams of 100 More Glorious Years for the Party: Might China Awake?
Crucial Collaboration: The Case for Closer Australia-UK Defence and Security Ties in Light of a Rising China
Resisting China’s Economic Coercion: Why America should support Australia 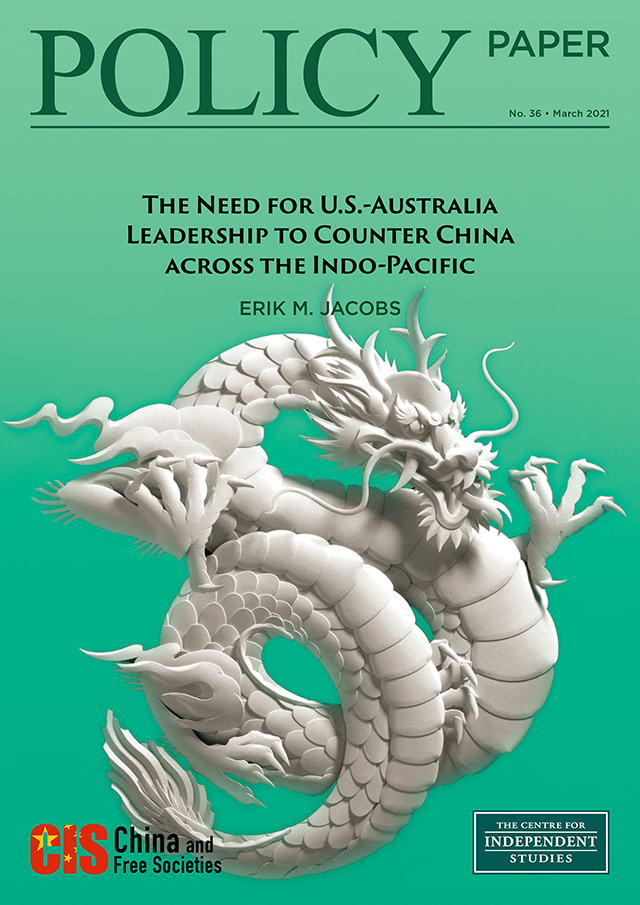